Many districts have shown a strong interest in open educational resources—free academic materials that can be shared and repurposed by teachers and others. And there are few collections of open materials that can rival EngageNY, an online resource created by the state of New York, which has found a surprisingly devoted—and massive—nationwide audience.

How popular are EngageNY resources, exactly? New York officials say the materials have been downloaded 45 million times by educators around the country. There are 13.3 million yearly users, and 34.6 million visits to the site.

Open ed resources are viewed with suspicion by some commercial publishers, who see them as static materials that lack the continuous investment necessary to improve them and meet specific school needs.

Yet they’ve drawn a strong response from many educators. As we’ve reported, some districts have found that choosing resources like EngageNY gives them more power to customize content to their liking—even the collection and organization of those materials requires a ton of work on their part.

Here are the state’s estimates of how daily usage of EngageNY’s online resources, which are designed to be aligned with the common-core standards, have grown since its launch in 2011: 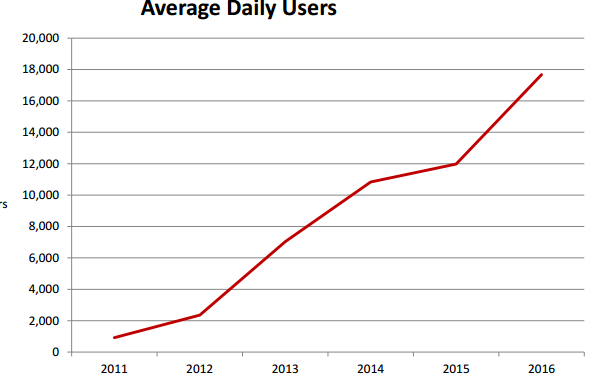 When it comes to visits by individual states, New York, probably not surprisingly, tops the list. Here are the state rankings:

Here’s the usage in the United States and other countries:

Even as EngageNY’s popularity among educators has grown, other efforts are taking hold to offer teachers additional help. As my colleague Liana Heitin recently reported, a new organization called UnboundEd is launching a free website designed to help teachers master the common core’s grade-level goals.

UnboundEd’s site will be populated with EngageNY materials and other common-core resources vetted by its team members, most of them former classroom teachers. It will also provide in-person training for educators, at a cost.