Local education foundations, whose grants provide K-12 funding beyond taxpayers’ dollars, have hit a new high, holding more than $539 million in assets and raising nearly $400 million, according to research released today by the Caruthers Institute.

That sets a record in the annual study and rankings of nearly 200 foundations, which is in its fourth year, according to Dewey Caruthers, founder of the nonprofit institute. The education foundations distributed about $165 million in programs for students and teachers and worked with about 58,000 volunteers.

Florida and Texas are the states with the most well-funded and high-performing foundations in the top 50. The Pinellas (Fla.) Education Foundation, a Tampa Bay-area organization that has raised $140 million since it was founded in 1986 to support its 103,000-student district, has led the list four years in a row. (See the top 25 below.) Besides these two states, Utah, California, Tennessee, and Nebraska have the most representation among the education foundations in the top 50 for the past two years.

“The simple reason that Florida and Texas have the most, is that their K-12 education foundations have been around longer,” said Caruthers, author of the study, which he originated in 2014. “In Florida, there are organizations that are 25 years old. It’s a really big part of communities, with boards of directors who are drawn from the top business and education community leaders.”

Two foundations ranked in the top five three years in a row: AchieveMlps, which is Minneapolis, Minn.-based, and the Chattanooga-Hamilton County Public Education Fund in Tennessee. New to the study this year is the Irvine Public Schools Foundation in California, which ranked third.

All of the foundations work to supplement public schools by raising money that can be used to enrich students’ educational experiences or meet their academic or athletic needs. 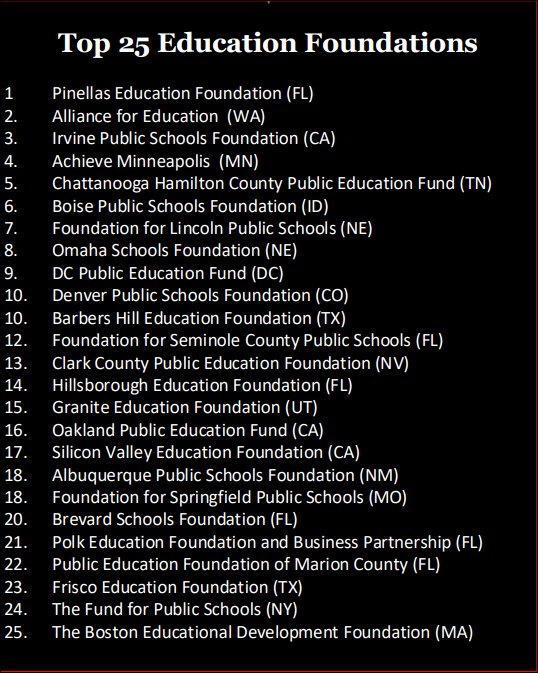 Topping Division 2 is the Foundation for Springfield Public Schools, which provides financial resources for educational enrichment beyond the daily operational needs of the 24,900-student Springfield, Mo. school district, and has raised about $17 million since it was founded in 1990.

In the third tier, the Frisco Education Foundation in Texas is the highest-ranked. According to its website, it has awarded more than $4.5 million worth of scholarship funds since 1999, and about $657,000 has been awarded in grant money to educators to carry out “Great Ideas” in the classroom.

And in the fourth division, the Morris Educational Foundation in New Jersey is the leader. Its goal is to “enhances educational opportunities for more than 5,200 students in all 10 schools of the Morris School District,” with a mission of enriching and inspiring the academic pursuits of all students, from preschool through high school.

“Some of the foundations that serve small districts are rising up the ranks nicely,” said Caruthers, pointing to the Barbers Hill Education Foundation in Texas, which serves 5,250 students. “Even though they’re serving smaller school districts, it means the education foundation can have a bigger impact on their students.”

The 2017 study is based on 2015 data, the most recent available, and reflects changes in the economic outlook, Caruthers said. “Since the economy has improved, the fundraising for education foundations has improved, too. We’re definitely seeing that,” he said.

Since school districts often have very little discretionary income, foundations can make a difference in expanding educational leaders’ options. “Smart superintendents are really understanding that education foundations are a fantastic avenue for them to innovate in how the district is educating their children,” he said.