We’re always interested in what hits the sweet spot with our readers, so we’ve crunched the numbers to determine which were the most-read blog post on Marketplace K-12.

Stories about big companies making education moves in the marketplace, like Google, Pearson and Amazon, were particularly popular on the blog, while most-read stories in other categories run the gamut of topics, ranging from social-emotional learning to learning science and data analytics. Here are our top 10 most popular blog posts of the year:

#1–Pearson Set to Sell K-12 Curriculum Business, but Not Assessment. The news that one of the biggest players in the K-12 marketplace plans to sell off its curriculum business rocked the education world. The company said curriculum products and services were the “lower margin” part of its empire, and reported a revenue decline in the “high single digits” in 2017 in U.S. sales of curriculum products, leading to the sell-off. But the company said it would keep its assessment business, where Pearson leaders reported they saw growth potential. See #7 below for another Pearson story from later in the year to bring you up to date. 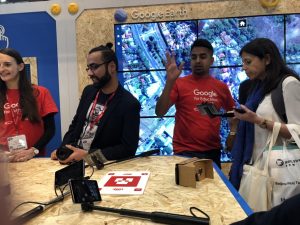 #3–Google for Education Launches Beta for ‘Create Your Own’ Virtual Reality Experience. For years now, we’ve been writing about Google’s increasing dominance in the K-12 world through the operating systems it provides for Chromebooks and G Suite for Education digital tools. The technology giant announced at Bett, the world’s largest ed-tech show, that it would take its virtual reality Google Expeditions tool, which allows students to go on virtual field trips to places like Machu Picchu and Antarctica, a step further by letting some students create their own immersive virtual experiences with a 360-degree camera and the Google app. The “create your own” virtual reality experience was a top request from users of Google Expeditions, company officials said.

#4–Student-Centered Learning in Spotlight at World’s Largest Ed-Tech Show. EdWeek Market Brief visited Bett in London this year and found “student-centricity” to be a theme throughout the ed-tech show, with teachers and students chiming in about what that meant for their instruction and the projects they worked on. Other big themes at Bett included an emphasis on personalized learning to help students improve cognition and skill development, and a discussion of the jobs of the future and how to best prepare students for that workplace. 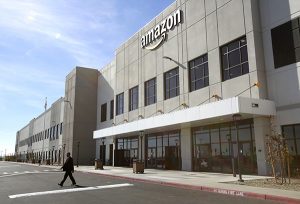 #5–Amazon’s Footprint Grows in K-12 Purchasing. Should We Be Worried? A report from a price-tracking firm found that Amazon could receive up to $5.5 billion over the next 11 years through a cooperative purchasing contract used by cities, counties, and school districts. But districts may end up paying significantly more to buy everything from paper products to musical instruments using these cooperative Amazon contracts, rather than buying from other sources. In addition, vendors such as office-supply giant Guernsey were wary of being shut out of school business. 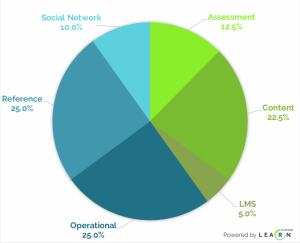 #6–What’s Trending in New Ed-Tech Top 40 Digital Tools. This ‘Ed-Tech Top 40’ analysis from Lea(r)n Inc. analyzed the usage of more than 2,000 ed-tech tools used in K-12 school and found that Google products, including YouTube, ruled the list. The analysis was based on real-time online activity from over 300 schools and districts, generated from more than 2 billion data points using a plug-in on Google’s Chrome browser that identified what’s being used in schools. Google Docs and Google Drive captured the number one and two spots on the ranking. Check out the story for the full list of digital tools and their usage levels.

#7–Investors Pressure Pearson CEO for Details on Sale of U.S. K-12 Curriculum. Following up on the #1 story above about Pearson announcing this sale, which seemed to be imminent when revealed in February, by July investors wanted to know what was up. There had still been no word (and none yet to date) about when a sale might take place and to whom. At the time, John Fallon, Pearson CEO, said only this: “We are continuing to hold the K-12 business for sale. This signals [that] we do expect to proceed with a disposal.” Since then, confusing things even more, Pearson unveiled a new K-12 history curriculum, while still saying it would sell off its curriculum business. Stay tuned in 2019 for new developments.

#8–Weld North Education Sells Group of Ed-Tech Assets for Nearly $1 Billion. This huge sale in the first week of 2018 was eye-catching and underscored the value of digital curricula and tools in the K-12 market. Private equity firm Silver Lake, which specializes in technology investments, purchased a major stake in Weld North, an education technology company focused on developing digital curriculum and tools for pre-K-12. The acquisition included three Weld North Education digital education companies —Edgenuity, Generation Ready, and Imagine Learning. In May, Silver Lake made an undisclosed investment into Weld North, and as a result Imagine Learning announced it was expanding the scope of its digital instruction products. 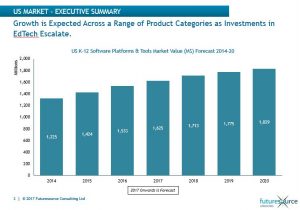 #9–K-12 Ed-Tech Platform and Tools Market Value to Increase to $1.83 Billion by 2020, Report Says. As computing devices of all types continue to flood classrooms, the market for the digital tools and software to power them grows. A May report from FutureSource Consulting Ltd. revealed that the market for ed-tech software and tools and back-end administrative technology platforms is expected to grow to $1.83 billion by 2020. Data analytics and instructional tools are likely to be strong areas of growth in product segments like LMSs, classroom management and collaboration tools, and student monitoring.

#10–Highly Rated Curricula Are Not the Norm in More Than a Third of Large Districts Studied. A report from the Center for American Progress discovered some unsettling news:  More than a third of the 30 biggest school districts in the United States don’t use any math or English/language arts curricula that are rated highly for alignment to state standards. In fact, the report noted that 24 of the 26 districts studied whose curricula are known and rated were using or recommending at least one curriculum with a low rating.

That’s a wrap on the most popular Marketplace K-12 posts of the year, but you can be sure that we’ll be following up on these issues and many others in 2019. Happy New Year!