A report released Monday by a national education technology group suggests schools switch to digital instructional materials by 2017, and highlights some of the policy barriers that must be knocked down in order to get there. The report, from the State Educational Technology Directors Association (SETDA), is a blueprint for states and districts looking to switch over to digital content, and mirrors a similar road map laid out by the U.S. Department of Education and Federal Communications Commission earlier this year.

“The textbook was the best technology we had… 50 plus years ago,” said Doug Levin, the executive director of SETDA, during a press conference at the National Press Club in Washington. Levin was joined by SETDA officials and representatives from states like Utah and Virginia, which are put forth as case studies for digital content policy in the report, titled “Out of Print.” Levin went on to list the trends changing how instructional materials are designed and delivered, like the Common Core State Standards, budget pressures and student demographic changes, among others.

“[It’s] the perfect storm for re-imagination of the K-12 textbook,” said Levin.

Supporters of the digital textbook often argue there is significant savings in switching from print to digital textbooks. Net sales revenue for K-12 education publishing was $5.5 billion in 2010, according to BookStats 2011, a report from the Association of American Publishers and the Book Industry Study Group. Digital revenues increased from 2008 to 2010 while sales of printed books were down 13.7 percent over the same period, the report said.

“This is a significant cost category in state and local budgets,” he said.

Research by Project RED that looks into the use of technology in education has shown that a 500-student school can save between $35 and $250 per student per year by switching to digital textbooks, as reported by Education Week. However, more than $100 of those estimated savings are associated with highly variable costs that are not directly tied to digital content. The estimate also assumes the price of a tablet is $250, less than many tablets including the iPad, which can cost between $379 and $700, depending on the specifications. 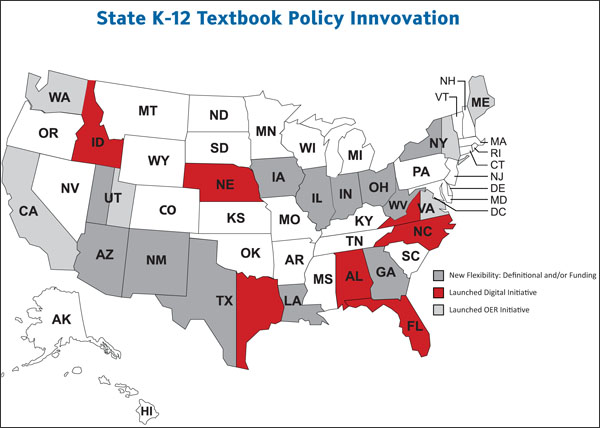 (Map of textbook policies around the country, from the State Educational Technology Directors Association “Out of Print” report, used under Creative Commons license.)

“Out of Print” outlines three recommendations addressed to “policymakers, school leaders, and publishers” on making the move to a digital world in schools, including shifting entirely from print to digital instruction materials by 2017.

The second recommendation is to develop “a vision and road map for completing the shift,” such as eliminating unnecessary regulations that presumably hinder the path to digital textbooks. At the press conference for the report’s release, Geoff Fletcher, deputy executive director of SETDA, said policy, as well as practice, needs changing, so good content isn’t kept out of school districts.

SETDA advises states to alter their definition of “textbooks” so funds designated for instructional materials can be used on digital content. The group also recommends investing in devices and infrastructure, including a sufficient supply of bandwidth in broadband Internet. SETDA recommends that, in the next two years, schools should have external Internet connections of 100 Mbps per 1,000 users (including students and faculty members) and 1Gbps per 1,000 users by 2017, according to the report.

Policies that limit materials available for school use should be replaced with advisory guides and states should more broadly share the results of research and evaluation on digital content, the report recommends.
Finally, SETDA recommends ensuring a marketplace for open and digital content, using recent developments in Utah as a model for doing so.

In Utah, recent policy changes have allowed and encouraged open educational resources to be used in the classroom, often created by teachers using free resources available for re-distribution on the web. My colleague Erik Robelen wrote about how educators in the state are crafting their own high school math textbook, aligned with Common Core State Standards in the subject. Textbook and curriculum recommendations are made by the Instructional Materials Center of the state’s education department. These recommendations go into an online state database, organized into categories such as publisher, subject, and course.

But authority over what instructional materials are used in the classroom doesn’t lie with the state, and is instead given to the local education agencies, according to the report. Groups of teachers and experts are also included in reviewing content.

“They have a great deal of flexibility in choosing textbooks that are most appropriate for their district and their student needs,” said Utah K-12 Literacy Coordinator Tiffany Hall, at the press conference on Monday.

Educational publishing executives have insisted that the move to open educational resources is not a threat because teachers don’t have enough time to select and vet the mass of content available online. But Hall said that when Utah teachers were approached to participate in creating math and science open texts, they were motivated by a desire to work with electronic resources and multimedia.

“We know that teachers have always shared materials and always shared books” she said. “This really helps us focus that sharing process.”

You can read the SETDA report, embedded under a Creative Commons license, below.

9 thoughts on “Report: Schools Should Move from Print to Digital Content by 2017”