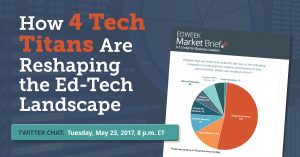 If you haven’t seen EdWeek Market Brief’s new story and nationwide survey detailing how big ed-tech companies are jockeying to control the K-12 technology market, make sure to check it out.

It’s an exclusive look at how the four tech titans–Amazon, Apple, Google, and Microsoft–are influencing the work of educators and planting seeds to grow future customers. The corporations’ efforts are shaping the way educators are using digital tools and products in their districts, schools, and classrooms.

To learn even more about the report and the data behind it, you can participate in a Twitter chat with its two authors on Tuesday, May 23, at 8 p.m. Eastern Time. Using the hashtag #TechTitansChat, you can talk with Sean Cavanagh, EdWeek Market Brief senior editor, and Holly Yettick, the director of the Education Week Research Center.

They can tell you more about how the survey was conducted and its analysis, and how those findings are influencing both the education marketplace and the overall direction of technology use and development in schools.

This nationally representative survey also does a deep dive into how educators view and use the technology available to them. The big takeaway is that Google is dominating the market with its low cost Chromebooks and free G-Suite of tools. More than 65 percent of educators surveyed said Google tools were used most frequently in their classrooms.

But the other companies are still finding openings in the market. Despite their pervasiveness, Chromebooks aren’t necessarily the favorite among educators in all areas. For example, 82 percent of educators said iPads helped boost student engagement, over 64 percent who said Chromebooks did.

Make sure to check out the story and survey results and then tune in to the Twitter chat using the hashtag #TechTitansChat. See you there.