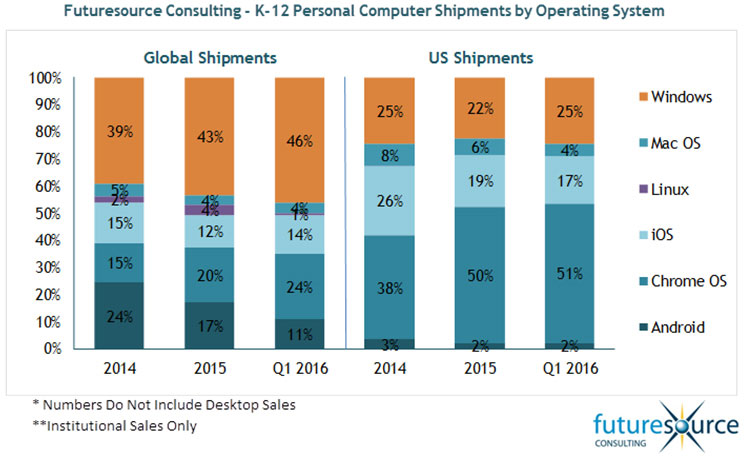 Growth in the personal computer market for K-12 schools has fallen off in the United States and is declining in much of the world, a new analysis finds.

Worldwide, education market shipments of personal computing devices dropped 15 percent in the first quarter of 2016 compared to the same quarter last year, with Latin America accounting for the largest declines.

Google’s Chromebooks’ shipments in the U.S. topped 50 percent for the first time in the first quarter of 2016, and Microsoft’s Windows represented about 25 percent of the market.

In the meantime, Apple’s iPad (represented as iOS on the chart above) and MacBook or MacBook Air (which use Mac OS), in particular, lost ground.

Together, the Apple products account for 21 percent of computers shipped at the end of the first quarter, compared to 25 percent in 2015 and 34 percent in 2014. There were signs of iPad’s market share slipping two years ago, but only three years ago it was king of the tablet hill, with 94 percent of the education tablet market share in the U.S.

Over the past three years, more than 26 million devices–not including desktop systems–were shipped to K-12 schools in the U.S., according to Futuresource. In the first quarter of 2016, shipments reached 2 million, a 9.5 percent increase.

Microsoft’s Windows operating system commands the lion’s share of the worldwide market, having grown to 46 percent of shipments in the first quarter of 2016. That represents a gain of 6 percent, year over year, according to Futuresource.

Educational technology projects in Venezuela, Mexico and Argentina have slowed in the first quarter. Unstable economic conditions are threatening several large tenders, which are invitations for bids on large projects for personal computing devices.

“The outlook for the rest of the year also remains bleak, while in the rest of the world, traditional large-scale projects in Turkey and India also look unlikely to see activity during 2016,”  Philip Maddocks, a market analyst at Futuresource, said in a company release.

The second and third quarters of each year are typically the peak buying periods for devices, and Futuresource indicated that competition is expected to be intense.

At the end of the first quarter, many Windows-based entry-level devices were launched at a price point below $300, directly competing with Chromebooks.

“The [operating system] battle for the education market is reaching a new level of complexity,” Futuresource indicated in its release, and developments in the “ecosystems” around different players are emerging as important considerations. Among the indicators the company points to: