Even as more international students are entering the United States than ever before—usually to pursue higher education—the competition for these students from colleges and universities in other countries is rising quickly, and the U.S. share of the market is eroding, according to a new report from the Department of Commerce’s International Trade Administration.

The number of “internationally mobile” students attending school in the United States was about 886,000 last year—8 percent more than the previous year. By 2017-18, their numbers are expected to top 1 million in the U.S. (Students are considered internationally mobile when they want to pursue their education outside the country in which they live.)

But while those numbers are growing, the U.S. share of the overall market is declining, and China’s is increasing, as shown above.

Competitive pressures from schools in English-speaking countries and from countries that are increasing their English-language course offerings, are chipping away at the United States’ overall market share of international students seeking education outside of their home countries, according to the findings in the first-ever “Top Markets Report” released by the Commerce Department earlier this month.

Forces contributing to that reduction in share of the education market include U.S. tuition costs, which are among the highest in the world, and a perception that U.S. student visas are difficult to obtain, wrote John Siegmund and Barb Rawdon, lead authors of the report.

While there is no cost for taking these open courses, the U.S.-based ed-tech company Coursera, for instance, charges $49 per certification earned after completion of a course. Just over a year after introducing this policy, Coursera received its first $1 million from students paying for the certificates they had earned. Foreign students who pay the fee for a certificate in a U.S.-based MOOC would be producing a U.S. export, the researchers wrote.

International students studying in the United States contributed about $27.2 billion to the American economy, according to the report. That number is expected to increase as more foreign students arrive to attend college here, and as tuition costs increase. (See the graph below.)

In fact, the United States has a “trade surplus” in the education market, because more money comes into the U.S. from international students than is spent by U.S. young people studying abroad. In 2013, $6.5 billion was spent by U.S. students, creating a surplus of $20.7 billion.

While the leading hosts of foreign students in the U.S. are colleges and universities, public schools, and college-prep private schools can host international students, too. The researchers found that some students are also increasingly attracted to U.S. boarding schools, as their families want to position their children’s acceptance at a U.S. college or university.

The Association of Boarding Schools, based in Asheville, N.C., has taken an interest in expanding its international reach, sending representatives to Southeast Asia, China, and Thailand in hopes of recruiting students, Siegmund said in a phone interview. The average expenditure of international students attending U.S. colleges and universities is about $30,000 a year, including tuition and living expenses, he said.

Many boarding schools that are sought after by students from other countries cost about the same amount. “The success in higher education shows the potential for high school” to attract international students as well, he said.

To Clark “Skip” Hults, bringing international students to the Newcomb Central School District in upstate New York, where he is superintendent and high school principal, represents a way to “flatten this globalized world” for his mostly isolated student population, he said in a recent telephone call. 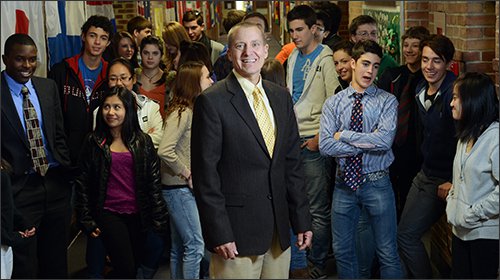 Hults’ initiative to attract students from other countries to his scenic, but small and remote, district in the Adirondack Mountains has brought him national attention, including recognition as one of Education Week’s 2013 Leaders to Learn From, It has also generated interest from other superintendents. “I’m getting calls at least once a week from districts wanting to start programs like ours,” he said.

“We did this strictly to expose our children to other cultures,” he said.

Now, students arrive on F-1 visas, and they are charged $5,000 because they require more administrative costs, as well as English instruction, said Hults. He is frustrated that federal law prohibits public schools from hosting an international student for more than one year at a time, while no such restriction governs private schools.

“They have an unfair advantage,” Hults said in an interview. “The kids who want to come, but can’t afford [private school tuition,] what happens to them?” he asked. This puts his public school in the position of having to continually recruit new students to fill the one-year slots.

Hults, who said he has had as few as five and as many as 20 international students in any single year, is expecting fewer than 10 to enroll this fall.

Typically, his students from other countries have spent at least $2,500 throughout the course of the year to cover their expenses beyond tuition and housing. The ripple effect of Newcomb’s education exporting is creating a positive trade balance in their small community, he said.

Credits: Charts are from “2015 Top Markets Report: Education,” and photo of Skip Hults by Heather Ainsworth for Education Week