The value of mergers and acquisitions in the education industry dropped significantly during the first three quarters of this year, compared to the same time period last year, a new analysis has found.

The worth of those transactions declined 70 percent, going from $14.4 billion in the first three quarters of 2015 to $4.3 billion in 2016, according to research by the investment bank Berkery Noyes. (See chart, below.)

The number of mergers and acquisitions in the sector also declined during the first three quarters of this year compared to last year, but the there was a slight uptick in this most recent quarter.

In 2015 there were 323 education industry transactions for the first three quarters of the year, compared to 295 this year. However, the most recent quarter showed a minor increase of 4 percent going from 99 mergers and acquisitions in 2015 to 103 during this most recent quarter of 2016, said Berkery Noyes. The group provides advice and financial consulting to middle market companies in the technology and information space. 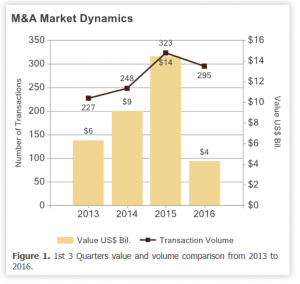 The most active market sector in this quarter were K-12 media and tech, with 22 transactions.

Two of the more notable deals in the K-12 sector during this period were:

McGraw-Hill Education’s acquisition of Redbird Advanced Learning, a digital personalized learning company with courses in K-12 math, language arts and writing, as well as professional devleopment programs for educators. The terms of this transaction was not disclosed; and

Imagine Learning, an elementary language and literacy software solution that teaches English to students around the world, acquired Think Through Math, a supplemental online math program that uses adaptive math technology and state-certified teachers to help struggling learners. The sum was also undisclosed.