The number of mergers and acquisitions in the education industry fell over the most recent year, and the total value of transactions plummeted, in an overall cooling of dealmaking in the sector,  a new report shows.

There were 379 total transactions in the education market in 2016, an 11 percent drop from 426 the year before, according to the report from Berkery Noyes, an independent investment bank. The bank provides consulting on mergers and acquisitions and financial consulting.

Meanwhile, the total value of transactions dropped sharply, from $17.75 billion to $5.32 billion, Berkery Noyes officials said. That decline was partly due to a falling off in the number of mega-deals. In 2016, there were just seven deals with disclosed values at above $100 million, compared with 19 deals of that magnitude in 2015.

Some of the drop-off in dealmaking in the most recent year was a result of a heating up of transactions the year before. For instance, the number of strategic deals—in which there were no financial investors or private equity firms involved in the transaction—soared from 242 in 2014 to 320 in 2015, a 32 percent jump.

But in 2016, the number of strategic deals scaled back down again, falling to 272, the report found: 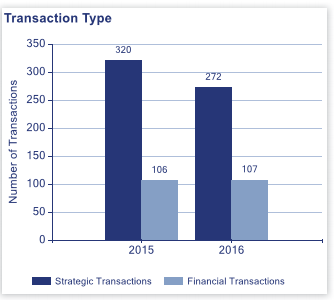 The report accounts for deals across the education sector–not just K-12, but also higher education and some kinds of professional training.

Berkery Noyes officials said the education industry is going through a “period of transition,” and they still see reason for companies looking to make acquisitions to stay aggressive.

“There is currently an opportunity for acquirers to take advantage of the digital adoption in education and the potential to create new pathways for instruction and credentialing,” the authors of the report write.

The continued appetite for learning management systems, for tools and platforms focused on personalized and adaptive learning, and the proliferation of computing devices in schools is strengthening the overall digital landscape in education.

That activity is “allowing the introduction of new entrants into the space and compelling incumbent education providers to evaluate new technologies and models,” they explain. “All of this bodes well for future M&A activity.”