Reach Capital, one of the most active venture capital firms in schools, has launched a new $82 million fund that is putting a priority on backing companies that are delivering information directly to parents about schools, lessons, and child development.

Companies serving other parts of the market—including school districts and higher education—will also be supported by the fund. But the focus on “consumer-facing” products is meant to address what the Reach Capital investors see as an overlooked need.

Many families are hungry for information about not only what’s going on in their children’s schools but on how they can help their children educationally at home, said Jennifer Carolan, a general partner at Reach Capital, in an interview.

The appetite for easy-to-access information that is backed by research and delivered via technology, from early childhood education on up, has grown partly because a new generation of parents expects it, she said.

Many parents today “are millennials, and they have grown up connected and used to apps and services,” said Carolan in an interview. “And part of it is that there hasn’t been as much innovation as parents are asking for in the early-childhood years.”

One of the parent-focused companies that will get Reach Capital’s investment is Winnie, a platform that allows parents to ask questions of a community of users about needs in areas such as childcare, clothing, shopping, and kid-friendly activities and restaurants.

Another is Lovevery, a platform designed to give parents tips on play and activities that will help children’s development that is supported by research. “Designed by experts for your baby’s developing brain,” Lovevery’s website says.

In another section of the site, it offers resources on “stage-based play,” and says, “Just what your baby wants to see, touch, and do at each stage.”

“That’s something we care a lot about—liberating information and research around childhood learning and making it very accessible to parents,” explained Carolan.

One of the more vexing questions for companies in the education market is how much appetite there is for research-based products. District officials sometimes say they crave products backed by evidence, yet their willingness to evaluate and buy products based on rigorous standards is unclear, at best.

Carolan says there is a demand for research-based products among parents. But there’s an obligation on companies to deliver the information in a digestible format.

“There’s so much on the internet about early childhood education, and trying to discern what is valid and what’s not is challenging,” she said.

Reach Capital’s history of investments can be traced to the NewSchools Venture Fund, an organization that created a seed fund that made 43 investments in companies that include Newsela, BrightBytes, and NoRedInk.

Reach Capital was officially launched in 2015. An initial round of investment, called Reach I, poured $53 million into 35 companies, including those focused on K-12, early-childhood education, and parents.

Over time, K-12 has made up the biggest portion of the applicants seeking funding from Reach Capital: 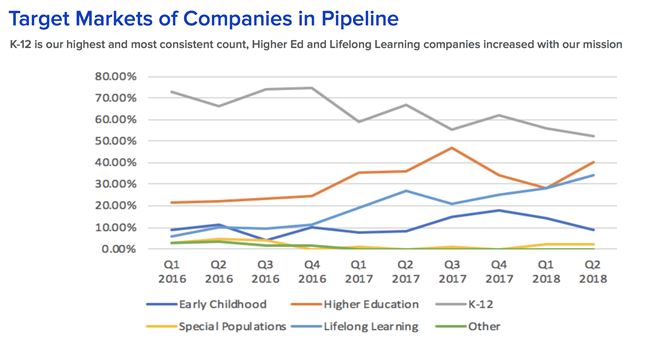 There’s a crossover between companies selling to families and those focused on marketing to districts, Carolan said. Some companies start out in one market and jump into the other, while others try to find buyers in both seamlessly, she said.

From its inception, the fund has been about “testing a hypothesis,” she said, “Could we invest in mission-driven entrepreneurs that were having an impact on education? Mainly it was K-12 at the time. And could we do it in a way that would attract outside capital? And bring more investment growth to these companies that were primarily serving schools and teachers.”

Follow EdWeek Market Brief on Twitter @EdMarketBrief or connect with us on LinkedIn.
Coverage of how parents work with educators, community leaders and policymakers to make informed decisions about their children’s education is supported by a grant from the Walton Family Foundation, at waltonk12.org. Education Week retains sole editorial control over the content of this coverage.

One thought on “New Venture Capital Flowing Into Education, With Parent-Focused Products In Mind”