The amount of venture capital flowing into K-12 education technology companies reached $642 million in 2014, jumping 32 percent over the previous year, with investors showing a strong appetite for platforms to help schools connect with parents and perform data analytics, according to a new report.

The biggest 10 investments accounted for more than half of funding going to companies such as Desire2Learn and Clever, among others, according to the analysis, published in a blog post authored by Vivek Murali, an associate partner at the NewSchools Venture Fund.

So where did all that money go?

Up until this point, much of the venture capital in ed-tech has gone to higher education-focused companies, such as Coursera and Chegg, and into consumer-oriented companies, the venture fund says. Investors shied away from a K-12 market that tends to favor established players and has long sales cycles.

But in 2014, the landscape appeared to shift.

“[S]everal of Silicon Valley’s top-tier venture investors [made] their first K-12 investment in over a decade in companies demonstrating strong user growth,” such as Edmodo and Remind, notes the venture fund.

Overall, the amount of venture capital investment in K-12 ed-tech in 2014 was almost certainly a record—topping the previous highs of the dot-com boom era around 1999-2000, said Vivek Murali, an associate partner at NewSchools and the author of the post. He cited previous estimates of education investment by GSV Advisors as a point of comparison.

Much of the new interest in pre-college ed-tech can be linked to “a shift to more consumer-ish type products in K-12 ed-tech,” Murali said in an interview. Venture capitalists who were previously wary of companies struggling to break into the K-12 market, he said, are now enticed by business that are “bypassing that cycle.”

Located in Oakland, Calif., the NewSchools Venture Fund is a nonprofit venture-philanthropy organization. It either led or participated in 20 early-stage ed-tech deals in 2014. The organization’s estimates of venture capital investment is based on an analysis of financial filings, most but not all of which were publicly available, Jennifer Carolan, a managing director at the venture fund, explained in an e-mail. 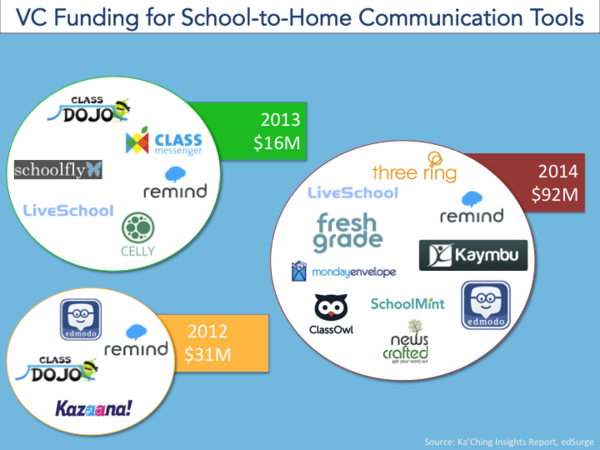 Many of the ed-tech companies that lured investment in 2014 are their early stages, NewSchools’ analysis points out.

Where might venture capital investors be looking next? NewSchools officials say they’re hoping to see more ideas emerge from companies that could draw investment for their work in areas such as special education and project-based learning.