Employees of education companies generally feel morale in their workplace is at least the same, if not better, than it was prior to the pandemic.

An EdWeek Market Brief survey of more than 300 representatives of education businesses finds that most respondents haven’t seen a morale drop: Nearly two-thirds say it’s the same or better than it was, pre-pandemic.

And 33 percent say their personal outlook has improved.

The survey, conducted in May and June, asked respondents to compare their current morale, and the morale across different departments within their companies, to pre-pandemic levels.

Across every department, the majority of respondents say the outlook is the same or better. But some departments have seen their employees’ enthusiasm sag more than others. Just 18 percent of respondents reported lower morale among executives, while 32 percent say morale has dropped for the customer success and product implementation employees.

When it comes to the morale of sales teams, opinions are mixed. Thirty-five percent of respondents say morale is lower than it was before the pandemic — the highest percentage of any department. But another 33 percent say morale among sales employees at their company is the same, and 32 percent say it has improved.

Many education companies took big financial hits during the early days of COVID, as overwhelmed school districts labored to serve students and families through remote learning. Some education companies struggled to find new opportunities, while others seized upon new strategies that allowed them to thrive.

The data on morale, captured in EdWeek Market Brief’s recently released 2021 State of the K-12 Industry report, could speak to the stabilization of employees’ work environments or a broader sense of normalcy and safety in their personal lives. 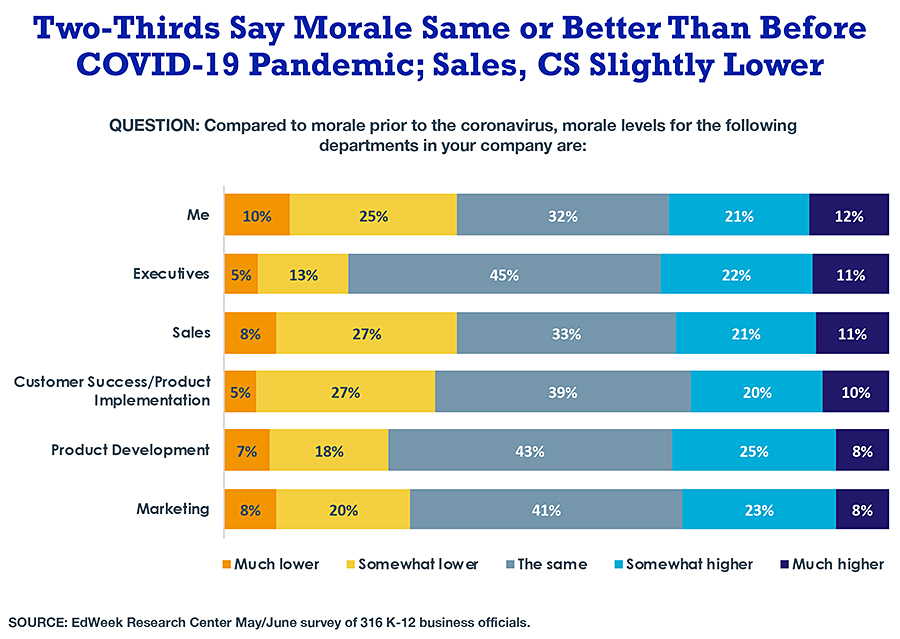 Jennifer Moss, author of The Burnout Epidemic, said it may also help that the K-12 marketplace has picked up again, as the pandemic spurred schools to look for more products and services to help with remote and differentiated learning.

“It may be that in this industry, with these people that answered that, they do feel like this is a good, flourishing experience,” Moss said. “It is definitely contrary to what we are seeing [more broadly].”

The relatively positive findings from the education sector stand in contrast to what Moss sees playing out in other industries.

Around 40 percent of the global workforce is considering leaving their jobs entirely, her research has found. And more than 3 million women left the workforce during the pandemic, moving the country back to 1980s levels of gender diversity, Moss said.

“A lot of people are saying, ‘I don’t want this style of working any more, and they are burned out,” she said. Her data show many employees “feeling disconnected from their co-workers.”

Still, Moss said she wasn’t surprised that, of all the departments, sales and customer success departments had the largest portion of respondents who said morale had fallen from pre-COVID times. That’s been true of customer-facing jobs across industries, she said.

“There’s been a real drain on those folks in the service industry,” she said. “They are really suffering, dealing with people that are also more volatile.”

The first, and most effective, effort any company should make to improve morale is to create ways for employees to connect with each other, Moss said. That can mean bringing remote teams together in the same space for a short amount of time, perhaps for training or providing an unmonitored messaging platform.

“We have to make sure that we are providing people access to each other at work. Having one friend at work reduces burnout,” Moss said. “Morale is one of those things, it’s like a tightrope that you’re constantly walking.”