One of the biggest hurdles facing ed-tech companies trying to sell their products in schools is a decidedly fundamental one: How can they tell which school officials have the power to make or at least influence buying decisions?

A recently released study of district procurement sheds light on that question—but it also reveals that vendors and district officials have very different perspectives on who in K-12 systems is truly calling the shots.

In one sense, those findings are not surprising. As we reported, the study, conducted by researchers from Johns Hopkins University and commissioned by Digital Promise and the Education Industry Association, found that vendors and K-12 officials have sharply contrasting views of some aspects of the procurement process—and share the same or at least similar frustrations with other pieces of it.

On the whole, vendors are much less happy with how procurement plays out than are K-12 district officials, the study found. Ed-tech companies are often perplexed about school districts’ buying needs, and they have little idea how to make their various digital tools, devices, and systems known—a step the study describes as “discovery”—to district buyers.

District officials, for their part, say they lack a reliable way of sorting through the abundance of product pitches that come their way, and struggle to separate the best from the rest.

When it comes to identifying top decisionmakers in districts, school officials and vendors seem to agree that some administrators are pretty important. Eighty-three percent of district officials surveyed, for instance, believe chief academic officers/curriculum directors have a strong degree of involvement in purchasing decisions, and 91 percent of providers surveyed say the same thing.

Both sides also saw school principals as pretty important, with 57 percent of ed-tech company officials and 61 percent of providers agreeing that those officials are heavily involved. (See the full breakdown below.) 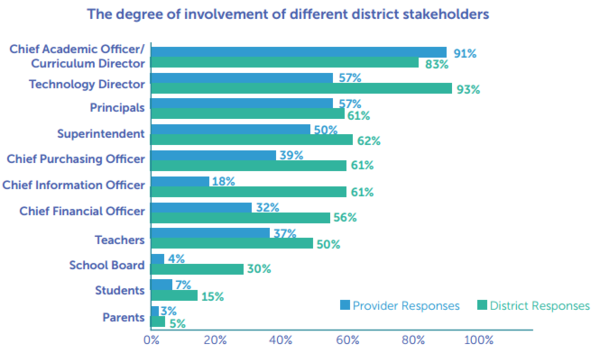 But there appears to be much less agreement on how tapped-in other K-12 officials are on buying decisions.

Phil Martin, who directs Digital Promise’s education marketplace initiatives and was the organization’s project leader on the study, cautioned that not all of the gaps between how K-12 officials and providers view district officials’ involvement were statistically significant. Digital Promise is a congressionally authorized nonprofit that seeks to improve education through technology and research.

But Martin agreed that the overall picture that emerges from the data reveals disconnects between how providers and K-12 officials view the process, and who’s involved in it.

One explanation is that district officials, when asked about the buying process, are likely to focus on the cycle from “start to finish,” Martin said in an e-mail, and thus credit a longer list of K-12 players as having somehow shaped decisions along the way.

On the other hand, vendors—while probably frustrated by how many K-12 officials have a hand in picking products—are also likely to bore in on the official whose “yes” matters most, Martin suggested. For many vendors, that district official is the curriculum director, the survey indicates.

“Providers are focused on closing deals,” Martin said. District officials, he added, are less focused on “the final decision/gatekeeper role than provider execs would be, so it makes sense that they’d lift up the involvement of a broader group than providers would.”

3 thoughts on “Who Calls the Shots in School Purchasing? Vendors, K-12 Officials Disagree”