The types of ed-tech products that school districts access is shifting away from more independent student resources in favor of educator-focused tools.

A mid-year report from LearnPlatform looked at the use of ed tech in K-12 districts across the country between August and December 2021 — a time when, a year and a half into the pandemic, many districts started sorting through purchases made during remote learning to decide how digital tools will be used moving forward.

The analysis is based on real-time online activity data from more than 228,000 educators and 2 million students, collected by LearnPlatform using a plug-in on Google’s Chrome browser.

LearnPlatform  — a developer of tools that seeks to help districts and states organize, streamline, and analyze ed-tech — then identifies and ranks the individual products that were most popular, based on the percentage of users.

The top 10 digital tools accessed most often in school districts remained dominated by Google products. The list, in order of usage, is as follows:

Meanwhile, organization- and educator-focused tools saw increases — a change that seems to align with the end of remote learning and return to classrooms.

The following graphic shows the breakdown of products in use in districts, as measured by LearnPlatform. 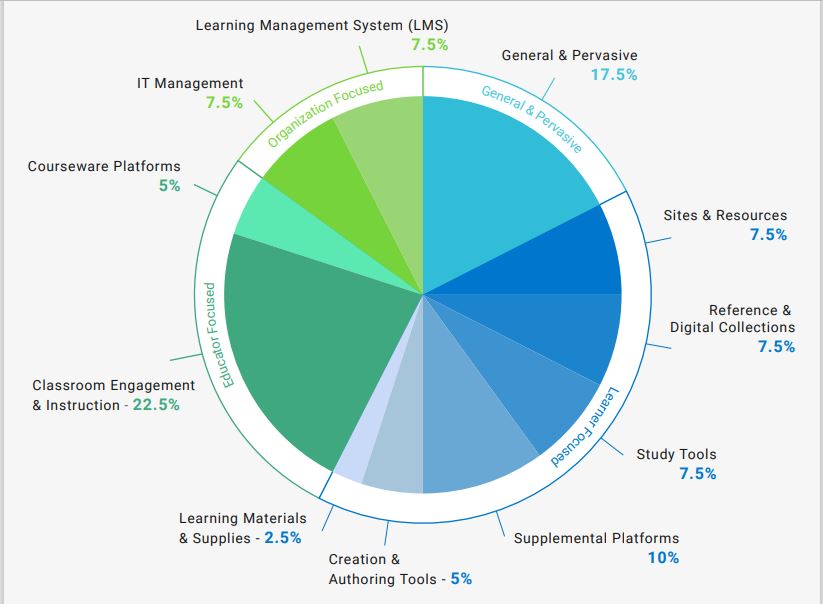 Learning management systems, which the report lists as an organization tool, increased from 5 percent of district’s usage to 7.5 percent.

Classroom engagement and instruction tools, which are considered educator-focused, jumped from 17.5 percent to 22.5 percent.

There was also an increase in the use of study tools, from 5 percent to 7.5 percent.

Karl Rectanus, CEO and co-founder of the company that conducted the analysis, said the increase in the classroom engagement and instruction category, “is noticeable and heartening.” Especially when paired with the slight drop off in video tools.

“This seems to indicate that teaching and learning in the first semester was just as tech-enabled as during hybrid/remote,” Rectanus said in an email, “but likely reflected more of the interactivity we know works better for retention, social-emotional health, and relationship-building for students.”