Backers of a new plan to upend “net neutrality” policies tout the proposal as a free market approach to internet oversight—one that will encourage an abundance of web content delivery, innovation, and investment, with no more government regulation than is necessary.

But some school officials and education organizations are deeply skeptical that the plan will protect educators’ access to online sources, or nurture innovation by K-12 entrepreneurs.

The “Restoring Internet Freedom Order” released in full form Wednesday by the Federal Communications Commission’s Republican chairman, Ajit Pai, is a broad reversal from a policy approved by his agency two years ago.

Net neutrality is the idea that web content should be treated equally by internet service providers, rather than allowing them to deliver material at faster or slower speeds based on which content providers are paying more, or other priorities.

In 2015, a Democratic majority on the FCC set out to safeguard net neutrality through a series of regulations forbidding blocking, throttling, or “paid prioritization” of content.

But Pai’s order—scheduled for a vote by the FCC on Dec. 14—curtails those rules. He says the proposal would replace heavy-handed regulations with a “light-touch” approach that avoids “micromanaging the internet.”

“My view is that the internet should be run by engineers and entrepreneurs, not lawyers and bureaucrats,” Pai said in a statement this week.

In K-12 circles, two of the biggest worries about Pai’s proposal boil down to the following:

Pai argues that his policy will prevent internet service companies from slowing down or interfering with content through increased transparency requirements. Under his plan, providers would be required to disclose details of their practice and performance—including whether they block or throttle service, or engage in paid prioritization.

As a result, internet customers can choose “the service plan that’s best for them,” Pai said in a statement, “and entrepreneurs and other small businesses can have the technical information they need to innovate.”

The order also tasks another agency, the Federal Trade Commission, with protecting consumers from unfair or deceptive business practices by ISPs—oversight the FTC practices with other businesses.

But Keith Krueger, the executive director of the Consortium for School Networking, questioned how much the transparency provisions would help K-12 officials. Pai’s proposal leaves the burden on districts to recognize bad practices by internet providers, and know the steps to follow to lodge a complaint, he said.

“Do they even have the capacity to know this is happening?” Krueger said in an interview. Of the overall FCC proposal, he said, “we certainly haven’t heard anything that assuages our concerns.”

While some districts dissatisfied with an internet provider’s policies would be able to switch companies—as Pai asserts—that option will not work in many small and rural communities, where there are few providers to choose from, said Krueger.

In a survey by the consortium this year of more than 400 K-12 school officials, 43 percent said their district has only one available internet provider. The majority of those were in rural areas.

“There’s no competition in many parts of the country,” Krueger said. “It’s not like the market will solve that.”

Trouble, or Status Quo for Startups?

Krueger also worries that if K-12 companies that provide online educational resources are charged significantly more by internet providers to deliver content, those companies may pass on those higher costs on to school districts.

The AASA, School Superintendents Association, shares similar worries, said Noelle Ellerson Ng, the organization’s associate executive director for policy and advocacy. While the group has not taken an official position on the internet order, it is worried about online resources getting curtailed.

She said her organization is also wary of changes Pai has sought for the Lifeline program—which subsidizes phone and broadband service in rural areas, and alterations that could be made to the E-rate program, which supports online connectivity in schools and libraries.

“Academic institutions need to have fair and high-speed access to information,” the AASA official said. “They rely on it for research, for instruction, and for the day-to-day running of the classroom.”

In a statement to Marketplace K-12 on Wednesday, FCC officials predicted that the newly proposed internet transparency rules would work, and that internet service providers will have a strong incentive to provide good service. 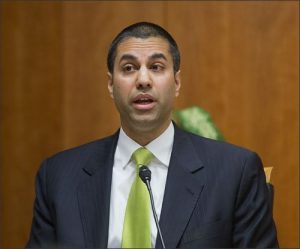 “The Internet has thrived under a light-touch approach for two decades,” FCC officials said in an e-mail. “There is little or no evidence that providers do anything but provide their customers with access to all legal content. It’s good business and what consumers, including schools, want.”

In addition, eliminating restrictive regulations put in place by the 2015 FCC order will reduce costs and increase deployment of internet service, “which will benefit schools,” agency officials argued.

Like some others, Krueger worries that startup education companies capable of bringing new ideas to K-12 may get squeezed out of the market, if internet service providers favor big content providers that can pay more.

But Don Burton, an investor in education technology who is the managing partner for the venture capital firm Learn Start, said he sees those fears as overblown.

There is already a “tiered system” for companies’ internet service, with those who can afford to pay for faster speeds paying for it, said Burton, who has invested in many startups in the ed-tech space.

For nascent ed-tech providers, the new FCC proposal is “much ado about nothing,” Burton said. The result of the FCC’s action is likely to be “the same service at the low end, with better service as the high end” for districts, he argued.

Of all the challenges ed-tech startups face in trying to make it in the school market, Burton added, “this is the least of my worries.”

Burton also said it was unlikely that school districts in rural areas would suffer if the FCC policy takes effect. Internet service providers won’t have a reason to diminish service to schools in those areas, he said, because there’s unlikely to be some great surge in demand from other customers “willing to pay a premium” for content and consume a lot of bandwidth.

Still, the notion that increasing transparency on internet service providers will discourage them from blocking or slowing content seems far-fetched to Chris Lewis, vice president for the advocacy group Public Knowledge, which opposes Pai’s order.

Under the FCC proposal, internet service providers could be relatively up-front about their efforts to treat different types of content differently—and as long as they’re transparent, K-12 officials may not have any choice but to accept it.

“Leaving it up to the ISPs, I don’t think anyone trusts that,” said Lewis, who is also a school board member for the Alexandria, Va., city schools. School officials need to be vigilant, even if the impact of the proposed FCC plan “takes years to translate into business practices [that affect] education.”

Photo: Ajit Pai speaks during an FCC hearing in 2016, before he was chairman of the panel.—Pablo Martinez Monsivais/AP-File

2 thoughts on “Will Reversal of FCC’s ‘Net Neutrality’ Policy Help or Hurt Schools?”