A lack of available education technology to teach and evaluate certain 21st century skills represents an opportunity for digital content providers, according to a report issued this week by the World Economic Forum.

The forum—an international organization whose goal is to improve the state of the world through public-private cooperation—looked at how 91 countries measured up in nine of 16 skill areas it identified as essential for meeting the needs of the 21st century marketplace.

“While all 16 of these skills are important, we have observed little consistency in their definition and measurement,” according to the “New Vision for Education: Unlocking the Potential of Technology” report, which was written in collaboration with the Boston Consulting Group. This lack of consistency was the reason only nine could be compared across countries.

Digital resources to teach and measure foundational subjects like literacy, math, and science are well represented, but ed-tech for higher-order competencies like critical thinking and problem solving, and character qualities like grit and initiative, are not adequately covered by existing education technology, the researchers found.

This grid illustrates examples of available ed tech, and identifies where there are holes to fill. 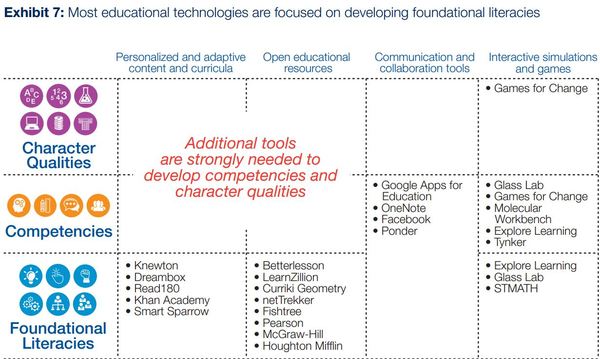 The specific competencies that are missing involve how students approach complex challenges, the report indicates. They include: critical thinking/problem solving, creativity, communication, and collaboration.

The six character qualities center on how students approach their changing environment. They include: curiosity, initiative, persistence/grit, adaptability, leadership, and social and cultural awareness.

“The specific products we highlighted went through a nomination process of a global steering committee,” explained Elizabeth Kaufman, a Boston Consulting Group partner, in a phone interview. “The intent was to be representative, not to say that these were ‘best in class,'” she said.

Interactive simulations and games, and adaptive engines and platforms offer “quite a bit of potential to be deployed further,” said Simonida Subotic, a project manager from the World Economic Forum project team.

Instruction in character qualities like curiosity, initiative, and persistence can be built into existing ed-tech products that improve literacies like computational skills, she said.

Kaufman pointed out that their report also identifies goals for policymakers. “It will take a concerted effort within countries, and for countries in collaboration with one another, to push the agenda on a common set of definitions and a common set of assessments on these skills,” she said.

The report includes a meta-analysis of skill data for countries that are members of the Organization for Economic Cooperation and Development, and those that are not. It divides countries into clusters that are high-income, upper-middle income, lower-middle income, and low-income.

“Income alone does not define whether you will have success on 21st century skills,” Kaufman said. The United States., for example, has gaps in numeracy and literacy when compared with high-performing peers such as Japan, Finland, and South Korea. Another outlier is Vietnam, which is in the lower-middle income cluster, but it ranked at the same level as Germany in literacy and outperformed France on that competency.

The following bar graph illustrates how skills vary in the different clusters. 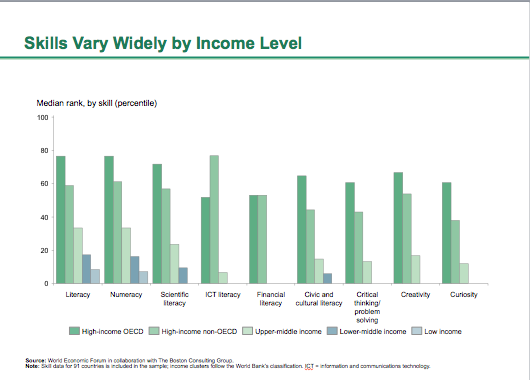 Kaufman said the World Economic Forum’s work in the area of education will continue, since it is at the top of the organization’s agenda.

An interactive version of the report is available here.

Charts: From the World Economic Forum, in collaboration with The Boston Consulting Group