Announcements were blaring, patience was running thin, and travelers were swarming around as I stood at the ticket counter at John F. Kennedy International Airport with tears streaming down my face. In all my years of traveling, being subjected to delays, cancellations, rude travelers, and various other injustices and indignities, I had finally reached a breaking point. A red-faced, blubbering, total and utter meltdown. On one hand I was profoundly embarrassed—I mean what real road warrior actually cries? On the other hand, it felt good to finally let go. I was failing to balance work and life, and I had nobody to blame but myself.

It was just supposed to be a day trip. An investor who had been interested in us for a long time was finally available for a lunch meeting. Our seed round was about to close. Securing a commitment could have been the perfect way to end the week.

The weather was cold, but clear and sunny all up and down the East Coast. It’s a short hop from Pittsburgh to New York City. In fact, the travel time on the ground is longer than in the air. Money was tight, so the “go” decision was made carefully from a business perspective.

Personally, I had hesitated to make the “go” decision. One of my sons had a music performance that evening which was the culmination of a long year of practice and jockeying for position in the orchestra. Not only had I promised I would be there, but I truly wanted to watch the performance. I was looking forward to discussing the highs and lows of the concert with my son, knowing which parts made the musicians most nervous, and which they had nailed.

Four or so years later, I don’t even remember if that deal closed. But I vividly remember the cancelled flight and how I took the hotel voucher and my ticket for the first flight out in the morning, and turned around. I felt empty and completely lost. What was I doing in New York City instead of being at home watching my son and his classmates? 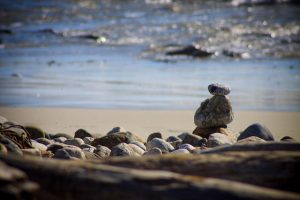 Of course I couldn’t have anticipated a mechanical failure or whatever the cause was for the cancelled flight. It may not even have been a big deal to my son that I wasn’t home. But I was despondent.

It wasn’t the last time I had tough choices to make when trying to balance being a single mom with being an entrepreneur. It was terrifying to not know how I was going to make payroll. But it was even more deeply unsettling to not be present in my kids’ lives when I wanted to be there.

Children grow up and time flies by faster than you can imagine. Work is always going to be there. Make your own work-life choices carefully.