I was recently at an OpenAccess Philadelphia event where a good friend of mine, Stacey Mosely, was presenting on government open data. At the end of these monthly events, audience members each introduce themselves. On this night, one young local decided to demonstrate just how tightly woven the Philly tech community is. He began naming members of the audience and their relationships to his experiences in Philadelphia. Part of this “six-degrees” presentation included Stacey and me: “I met Stacey and Michele at a birthday party last week and they are both excellent dancers!”

This is true. We are excellent dancers.  We often joke there is a disco ball above our heads because we love to have impromptu dance parties.

During the networking that followed this event, an interesting perspective was presented by a man who had heard me speak about starting a mission-driven, for-profit company.

He laughed with us and said, “It’s a good thing that you are an entrepreneur and [Stacey] is an engineer, otherwise you might have just seemed like a couple of bimbos.”

After an awkward pause and dimming smiles, I replied, “Hmm. That’s an interesting point…”

It only took moments for this man to realize his remark was inappropriate and apologize (blaming the beer), and my gentle admonishment seemed enough. Ironically, Stacey and I didn’t want to further embarrass the man.

But just for fun, let’s pretend that we brought out the whiteboard and broke down his statement logically to view its implications.

1. First, let’s code this man’s logic using an If/Else statement like this:

code to be executed if condition is true

code to be executed if condition is not true 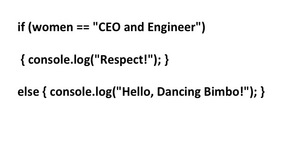 2. Now, given this man’s logic, if we were to plot a linear regression model like the following:

where y is the presumption of how likely a woman may be an entrepreneur or technologist on a scale of 0 to 100, and where beta coefficients are weighted for attributes like yearly frequency of dancing and yearly frequency of celebrating birthdays, then we see that as these frequencies increase, the presumed likelihood of the female being an entrepreneur or a technologist decreases, as seen below. 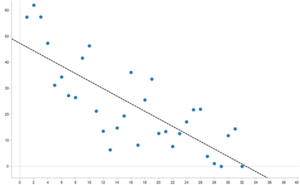 Yeah, the logic didn’t make sense to us either.

Ironically, it was at this same event where I learned that before 1988, women could not get a business loan without the signature of a male relative. That’s the year the Women’s Ownership Act was passed and economic impact of women-owned businesses was highlighted.

I took a Culture, Communication and Process course during my undergrad studies in digital media. I was immersed in ethnographic studies and familiar with gender theories, persuasion and perception from one environment to the next. As a woman, I recognized that women had to overcome barriers, but since I hadn’t really experienced it firsthand, I didn’t subscribe to the notion with any conviction. There was a stigma of feminism that I saw as a detriment to its progress. But now, as a founder of a business, it’s a different story. I do feel a commitment to the women who have worked to enact laws like the Women’s Ownership Act, and to those who are forging their way to leadership roles today to build street cred for women professionally.

Nonetheless, we can’t deny how subconscious value judgments are. There is a reason, headlines tell us to “Hire a good looking CEO.”

There’s also a reason that during the State of the Union address, President Barack Obama stressed the importance of women’s success in business. “It’s time to do away with workplace policies that belong in a Mad Men episode,” he said.

Actor Elisabeth Moss, who plays a secretary-turned-copywriter on Mad Men, describes the experiences for women working in 1960s New York ad offices as similar to the experiences of women today: “If you’re a strong, powerful, smart woman you tend to end up, at some point, in a roomful of men trying to prove that your ideas are good.”

I have already had some of these experiences, and as a result, I’ve had to sort of step back and evaluate my position and the “feedback” I receive. For example, I only had a vision&mdash;no product&mdash;when people began telling me that I needed someone who knew “business.” I readily accepted that that person wasn’t me. I never considered that men were telling me this because I was a woman, however, I do wonder if any of my feminine characteristics, demeanor or style of thinking, would not align to the type of conventional leader they might recognize as being successful&mdash;at least in their subconscious.

So today, I push back on that idea that I’m not the “business person.” I know my product. I know my business. I know my market. I see the opportunities and the possibilities, and I beat the paths to get to them. I do it on my terms, with my own style, as a woman.

While I’m not here burning my bra, I am trying to emphasize just how subconscious perception actually is. The guy who made the bimbo comment, despite how blatant it sounded, is not a “bad guy.” After all, he was able to recognize the judgment he made. The problem is that he only realized it after saying it aloud to two women.

3 thoughts on “CEOs, Engineers, and Bimbos”