So when I received an invitation to present at an education conference in Beijing from The Chinese Society of Education this summer, I immediately accepted.

The Chinese Society of Education is a state-level organization that is governed by the Ministry of Education of the People’s Republic of China. It’s the nation’s largest academic organization focused on professional development and certification.

The CSE wanted me to talk about ed-tech companies in the U.S. and how we work with schools and districts. I wanted to know more about the market in China.

Attending the “New Policy, New Trend, New Technology” conference was unlike any education conference I’ve attended. The officials and senior people sat at the front of the room in overstuffed red velvet chairs with white doilies on the backs and arms. Each of the three rows of red chairs had dedicated servers offering tea and water at regular intervals.

When one of the officials approached the stage to speak, a sweep of spotlights and inspiring music arose. But the actual speaking was long and dry, with no visuals. 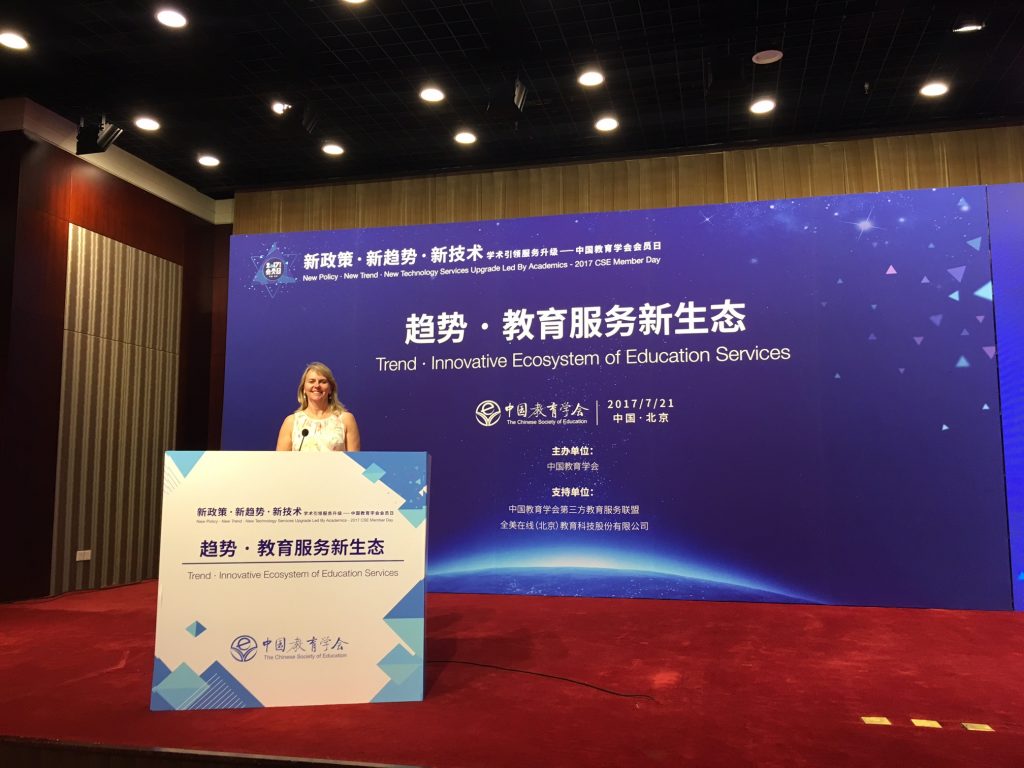 The speakers discussed new education standards, expanding the reach of their professional development, and how to make schools more open to digital learning. Sound familiar?

What’s not the same, however, is the market. In a breakout session after the opening morning remarks, I spoke as part of a session about new technology

The speaker before me, a professor, said the education services market doesn’t know where the demand is for ed tech or what problems ed tech could solve. Also, the providers don’t understand state policies and schools don’t know what products are on the market.

Another barrier is that the Chinese government restricts internet providers. They block Google entirely, making surfing the net an entirely different experience.

The next speaker said there were 14,000 education-related enterprises in China. However, he lamented there is no standard for purchasing ed tech. And there is an expectation among teachers that ed tech should be free.

He said there is a supply of quality products, but the market is not mature enough to know how to buy and use them.

The Chinese Society for Education would like to build a platform to allow ed-tech service providers and schools to meet and discuss needs and fulfill demands. With 54 branches around the country, the CSE is well positioned. But there are competitors who want to do the same thing.

This fall they will have the first-ever third party education summit. The CSE will introduce new ed-tech products from China and around the world. For now, we’ll sit this conference out in the U.S.