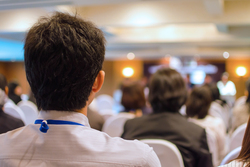 I was wandering though a typical education conference setting: hallways stretched as long as football fields; hundreds of educators with badges, ribbons, and buttons affixed to their shirts streamed by; people filtered in and out of honeycombed rooms for various sessions. Finally I discovered my spot, the room where an Innovation Ecosystems panel was set to take place, led by ed-tech guru Barbara “Bobbi” Kurshan, the executive director of academic innovation at the University of Pennsylvania’s Graduate School of Education who also oversees the Milken-Penn GSE Education Business Plan Competition. Much to my surprise, this panel (on which I was sitting) turned out to be the beginning of a really good experience at the Teaching & Learning 2015 conference.

The last few times I attended a conference, I went as a vendor. That pretty much translated into giving people free candy and key chains while I tried to squeeze in 15 seconds of attention for a pitch. It almost felt like I was hawking pizza rolls at the Sam’s Club alongside 200 other people hawking assorted frozen foods. In a nutshell, conferences gave me a bad vibe because I was so squarely on the other side of the attendees. As an ed-tech startup trying to establish my company, EdConnective, it makes sense to be where educators convene and that’s where conferences come into play. However, it can be difficult to engage in a thoughtful conversation with a school leader and potential customer when labeled as a vendor.

In direct contrast to my last three conference forays, my time at the Teaching & Learning conference on March 14th in Washington was actually very fulfilling. First of all, instead of paying upwards of the outrageous $2,000 that it often costs to be a vendor, my expenses were covered because I was speaking on a panel. The financial burden aside, I liked that this go-around was lower stakes. Secondly, and most importantly, I was able to meet and talk with educators and organizational leaders as their peer. Without the scarlet letter of the vendor badge, I felt that people were more open to authentic conversation and sharing about the challenges and opportunities that they see within their schools and organizations.

Being at Teaching & Learning 2015 allowed me to sit in sessions from organizations like the Center For Teaching Quality. Their representatives were incredibly open to chatting after the workshop, an opportunity that I often have to fight for on the vendor exhibition hall. Moreover, while wandering around the convention center admiring a random piece of art, I ran into someone from the Thurgood Marshall College Fund. That meeting sparked an impromptu and genuine conversation that extended into lunch. During our conversation, I was excited to learn about their 50 million dollar initiative with Apple to produce more minorities in the technology industry and we even identified some potential opportunities for collaboration.

All in all, attending an education conference as a participant turned out to be something wholly different than what I was used to. Instead of shirking away from education conferences in the future, I plan to revisit them but with a new approach and outlook.

Learn more about Will Morris and his teacher-coaching venture on Twitter @edconnective.