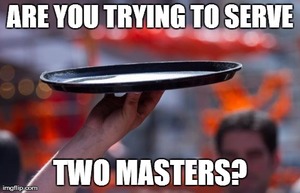 As a bit of a refresher, Edthena is a platform for bringing observation and feedback online for teacher improvement. We constantly talk about design for the experience of a teacher and of a coach.

It’s neither accident nor flaw that this exists. It purposefully parallels the real world experience of observation and feedback.

Recently, that new sales guy we hired came up with the idea of interviewing some Edthena users — coaches and teachers — to gather stories about their experiences.

As someone who talks regularly with our customers, I had a strong sense of what he might find and was even able to help point him in the right direction in some cases.

And in that statement is the revelation of the problem — I regularly talked with our customers.

Yes, knowing the needs of our customers is important. Being responsive to those needs is important. Knowing whether and how we’re delivering value (and value enough) to justify paying for our product is important.

But our customers who are writing the checks, the heads of departments and programs, are not always the primary users. And it’s the day-to-day users who have the more powerful stories to share. Yes, I speak to users on a regular basis, but I had not done any in-depth interviews following their experiences with Edthena.

Maybe there is a bit of a denial mindset in the act of not talking to your users more often. You avoid uncovering any painful stories about what it’s like when your product is actually used, hearing about things that went wrong, and the laundry list of features they want you to build. But you also miss out on positive anecdotes, like the ones we uncovered.

My favorite was from about a user that I had talked to several times during her pilot of the Edthena platform. But I had never followed up after the end of the year.

She supported her teachers from more than 700 miles away and told us that at the end of the school year, the educators she worked with through Edthena coaching were three times more satisfied with the support they received than the other teachers she mentored.

Did I previously know that she was supporting those teachers remotely? Yes.

Did I previously know she would be likely to report success using Edthena? Yes.

Thus as it relates to my admission of guilt and the idea of serving two masters, this experience made me realize I had become more focused on the customer, potentially at the expense of spending more time with our users and learning from them about the value we’re creating for them.

PS – One of my advisers, Jeff Wetzler, encouraged me for nearly a year to build white-paper-style case studies illustrating the success possible with Edthena. I was always “too busy.” If only I had taken that advice sooner!

9 thoughts on “Confessing My Sin: I Partially Forgot About Our Users”