By guest writer Elizabeth Vu, implementations lead at the Foundation for Learning Equality.

Our focus at Learning Equality, a non-profit organization based in San Diego, is to support the efforts of people interested in bringing educational resources into their own communities. We started as a small group of volunteers, but now have seven full-time employees. To build the team that supports our growing user base, we needed to figure out how to raise funds while keeping our software free of charge for anyone to download and use. 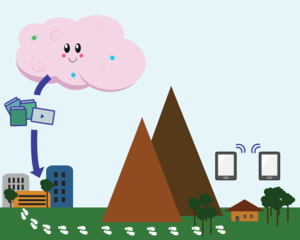 Our mission is to focus on the people least able to afford education technology. We therefore wanted to remove as many barriers as possible by offering our products without expectation of payment in return. Without a clear source of income, however, we were under immediate pressure to find funding to support further software development and implementation.

In October 2015, we decided to go the crowdfunding route. We launched a campaign with Generosity.com to help build and deploy our next-generation software, Kolibri, to remote and disconnected areas around the world. You can see our campaign here.

We’re thrilled to report that we are currently at 200 percent of our goal.  We wouldn’t have gotten this far without three critical pieces:

Telling our story was also our biggest challenge. Most of our funding goes towards software development, which is different from more traditional non-profit models that provide a very direct path from dollars donated to outcomes: With X dollars donated, they can go to a village and build Y schools.

When we are building a public good product, we have a tougher time getting people to donate, especially if those people are not the direct beneficiary. We found that telling a compelling story and establishing a narrative was imperative for us to make clear how the crowdfunds will have substantial impact for parts of the world that are disconnected.

2. Your Friends and Family (and Their Networks) Matter.

Our immediate circle of friends, family, and board members gave us the biggest boost in funds. Within days, we reached 10 percent of our goal. While we wanted to encourage donations from the broader public, we knew we needed to start somewhere. We had heard that with evidence of early traction, the public is more likely to donate to a funding campaign. But sometimes, it only takes one large donation to make a difference. In our case, we exceeded our funding goal because a donor in our network heard about us and wanted to contribute on a large scale.

We saw a small bump in donations after adding material perks for each donation level. Material incentives in the forms of stickers, t-shirts, and electronic hardware devices served as the backbone of our donation ladder.

We at Learning Equality have learned (and are still learning) much about running a successful crowdsourced fundraiser. We still aren’t sure how a campaign can become instantly viral in the general public arena, but we continue in our efforts to build a universal reservoir of educational resources to be used anytime, anywhere, and for everyone.

To learn more about Learning Equality and their crowd-funding campaign for Kolibri, please see www.learningequality.org/kolibri or visit @LearnEQ on Twitter.