It’s not every day you get to meet the president of a country. For a private discussion. About your company.

This is exactly what happened this past August. Edthena was invited to present at the 2013 EduAction Forum, an annual conference for the state of Israel held before the start of the school year.

Prior to the conference beginning, we were ushered into a side room at the Holon Istitute of Technology. And since I usually get asked the question when telling the story, there were no machine-gun-carrying bodyguards at the door.

Once in the room we had a casual conversation with Shimon Peres, the president of Israel, to explain how our businesses offered innovative solutions to problems faced by his country.

We had some extra time, so I made a joke. Nobel-peace-prize-winning, former-Prime-Minister Peres responded. He asked me a few more questions since he was curious as to whether ours was a sustainable business model. I answered. Pretty exciting.

Except I couldn’t prove that this had happened. We weren’t allowed to use our own cameras when it came time for a group photo.

Of course there was an official photographer. It took me nearly six months of asking to get the pictures released. And I finally got them last week! 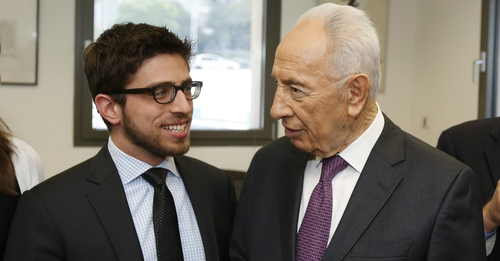 After the meeting, the event officially started. I’d say I “shared the stage” with the president and an Israeli pop star, but that overstates how things happened. We were speakers on the same conference program.

The event was broadcast across the country. You can see from the video (which I also discovered last week) that it was quite the production.

It was an honor to represent my company and country for such an exciting event.