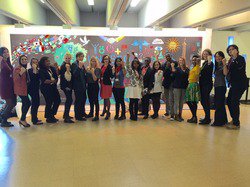 In an ongoing effort to engage youth in the collective march to reach the United Nation’s goals for sustainable development, UNESCO is counting on a newly launched education technology startup to help coordinate research and spark activitism.

The startup edtwist, founded by CEO Julie Lee in 2012 but only launched in October, allows users to organize and view “cards” containing research or links to helpful websites under larger “boards” which organize the cards by category. Commenting on cards or boards is limited to content creators or “collaborators” in an effort to ensure civil and topical discourse.

The website, which Lee acknowledges harbors many design similarities to Pinterest, allows creators and collaborators to “share” boards or cards over social media. It helps students organize and collaborate on online research research

UNESCO, which stands for the United Nations Educational, Scientific and Cultural Organization, is tasked with promoting global peace, security and international cooperation through major programs in education, natural sciences, social sciences and communications.  The new UNESCO initiative, supported by edtwist, is intended to draw people ages 15 to 25 into conversations about global sustainable development by having them research and work out solutions collaboratively in small groups of five to 10 “agents of change.”

The project, which launched last month, has its own board on edtwist where guidelines and example projects have already been posted.

The group of individuals using the edtwist platform that gets the most page views and social media engagements will be recognized and chosen to present their findings and recommendations at the 2016 International Youth Day, and the biannual 2017 UNESCO Youth Forum.

In an interview, Mark Brenner, a sociologist at Penn State University and one of six UNESCO chairs worldwide focused on youth empowerment issues, called the partnership with edtwist “a game-changer.”  He recounted being connected to Lee through Daniel Bena, an executive at Pepsi’s sustainability arm.

Brenner, who expects between 5,000 and 10,000 young people globally to participate in the agents of change program, lauds the platform as a way “to call for change directly.”

He sees it as a potential tool to allow youth to circumvent traditional institutional structures that may be dismissive of young people by allowing them to bring their ideas directly to public opinion through the Internet, giving them “immediate access to the table.”

Currently, UNESCO is not paying the startup for access to the platform. Lee notes that the publicity that comes from partnering with UNESCO will bring its own benefits to the Los Angeles-based company.

She plans to market the edtwist platform broadly, focusing primarily on public and academic libraries where a premium package will allow institutions to build their own personalized edtwist access point. This customized version of the free platform, would then serve as the framework through which all research is conducted, be it through Google, Youtube, or subscription-based content databases.  The company would also provide data analytics for the institutions to help them evaluate which resources are being used in what ways.

Lee confirmed that her company is further deepening its relationship with UNESCO, and that a new, specially dedicated access point for the international cultural agency should be announced “in the next couple months.”

In the meantime, in return, UNESCO is also providing content and resources for all edtwist users, aiding its effort to become what Lee calls a “one stop shop” for research and advocacy.