Ask people if they are aware of esports and you will get an astounding array of answers, ranging from “never heard of it” to “of course, it’s huge!” 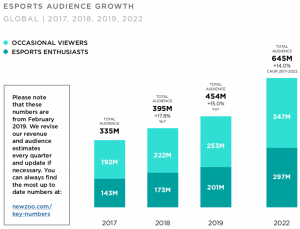 Esports are not as mainstream as traditional sports in the U.S, but worldwide esports generated $335 million in revenue in 2017. That’s relatively small when compared to the 2016-17 annual revenue generated by the Premier League (the league of futbol, aka soccer), $5.4 billion Euros (roughly $6 billion dollars).

However, Newzoo predicts that 600 million consumers globally will watch esports in 2023, generating $1.8 billion by 2022. This is approximately 15 percent year-over-year growth, which is significant.

Esports (short for electronic sports) is when a multi-player video game is played for an audience, usually by professional video gamers. Dota 2, Counterstrike: Global Offensive, League of Legends, Fortnite, Overwatch, and Starcraft II are among the most popular games. Audiences watch via streaming sites such as Twitch, as well as live in stadiums. Numerous esports stadiums already exist and more are popping up all the time, including the most recent announcement that a new $50 million complex will be opening in Philadelphia early in 2021. 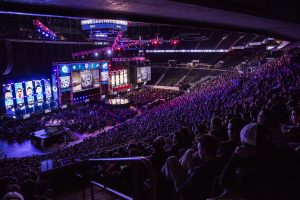 At the college level, over 150 colleges and universities are members of the National Association of Collegiate Esports (NACE) and offer officially recognized varsity esports programs. These schools have coaches and offer partial or full-ride athletic scholarships.

Wait, you say—there is such a thing as getting paid for playing video games?

Esports Earnings on the Rise

Richard Tyler Blevins, more commonly known as “Ninja” is a Twitch streamer, YouTuber, professional gamer and internet personality. As of May 2019, he is the most followed streamer on Twitch with over 14 million followers and an average of over 40,000 viewers per week. (Twitch is the leading streaming service where viewers watch their favorite gamers play in real time.)

Blevins has over 21 million subscribers on YouTube as of March 2019. He earns over $500,000 per month from streaming Fortnite. Blevins also brings in revenue from 20 million Youtube subscribers plus additional sponsorship deals.

Esportsearnings.com, which tracks the earnings of professional players, reports that the average salary is $60,000 per year. But salaries are only part of how players earn money. They also rack up tournament prize money, direct contributions from their internet fans, and sponsorships.

Personally, I’m interested in esports for various reasons, some of which I’m planning to explore in this blog in upcoming weeks:

Chart from the 2019 Free Global Esports Market Report, from NewZoo.

8 thoughts on “How ‘Esports’ Will Shape the Education Market”