The growing popularity of esports presents some interesting prospects, in part because the brand new industry represents a blank slate.

Esports has the luxury of not having to disrupt existing business models. Often times disruptive new products or services must change the way consumers act, purchase, or use a product. This can lead to stellar products dying on the vine because old (consumer) habits are hard to change.

The budding esports landscape is ripe for experimentation when it comes to monetization options and devising radical new formats. Many of these innovations will soon trickle into traditional sports. In fact, it is already happening. The sports industry is currently adapting direct consumer monetization strategies that originated in esports and gaming. Traditional media outlets such as ESPN are starting to shift revenues away from broadcast media rights into direct digital spending.

In this earlier blog post I wrote about the opportunities the field may present for education, where schools are creating esports teams and students are passionate about these “athletes” and follow them closely. There are opportunities for scholarships and other educational applications as the fan base continues to explode. 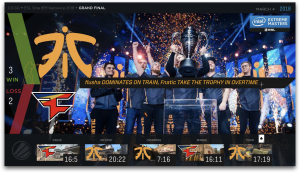 Yet while established pro sports leagues (soccer, American football, basketball, etc) are mostly watched through traditional media like television, nearly all of the esports audience is online. Entrepreneurs can experiment online with apps, websites, podcasts, and other content to attract these new audiences.

The esports field is large and growing fast. According to Kent Wakeford, co-founder and COO of Gen.G, “The 2018 World Series had about 14.3 million average viewers for the games, while the League of Legends world championship — broadcast worldwide on digital streaming platforms like Twitch — reached 78.5 million pairs of eyeballs.”

By 2022, Goldman Sachs estimates the esports audience will reach 276 million, similar in size to the NFL today. Esports represents a landscape ripe for innovation and experimentation.

Easy to Reach a Global Audience

Unlike many existing pro sports, the esports audience is young, digital, and global. According to Digital Trends, more than half of esports viewers are in Asia, 79 percent of viewers are under 35 years old, and online video sites like Twitch and YouTube have a larger audience for gaming alone than HBO, Netflix and ESPN combined. The fact that the audience is not geographically constrained also makes esports an attractive target for new, online products. With such a young, international, passionate fan base, education products could tap into that excitement.

“Esports offers a unique opportunity right now for new products and business models. It’s still early days in an emerging market, and we see that as a huge opportunity to create innovative new user experiences,” Simmons said. “We’re inspired by games themselves, and the rich graphics and deep interactivity that gamers have grown up with, and creating a new kind of sports media platform.”

6 thoughts on “Is Esports a Land of Opportunity for Entrepreneurs? This Company Founder Says Maybe”