This is a guest post from one of eduCanon’s co-founders, Swaroop Raju. eduCanon is a platform that makes online videos interactive by allowing teachers to embed questions during the video, so students are actively learning and instructors can monitor understanding in real-time or in preparation for class.

As a teacher, you may think slick production is the way to go in building engaging learning videos, but data out of MIT’s edX shows that variables within your control (and budget!) have more of an impact. I’m going to display two different types of video lessons and I want you to consider which one would lead to higher student engagement:

Video 1: (Above) This 10-minute video on the atomic structure is produced by a well-respected production company. It is comprehensive and includes advanced computer graphics with detailed visualizations of protons, neutrons, electrons, and more.

Video 2: (Above) This six-minute video on the same subject is recorded by a teacher with no background in video production. The video was recorded using a consumer recording device and visualizations were hand-drawn. While the video has a logical flow, it includes a lot of informal or off-the-cuff speaking that was clearly not scripted.

Teachers might assume that the first video, with its more professional production quality and comprehensive overview of the subject material, would lead to better results and higher student engagement.Considering our traditional relationship with video, through pre-recorded televisions shows or DVDs made by experienced video producers, it is logical for educators to assume the highest “quality” videos are most effective.

But new research and performance improvements we’ve tracked through the eduCanon platform suggests otherwise. edX recently commissioned a study of nearly 1,000 videos, segmenting them out by by video type and production style, and discovered this among their other findings:

You can find more details on the edX study and the findings here.

Now lets break down the components of an engaging video lesson delivered through eduCanon. This lesson made by Mr. Leatherwood, a math teacher from Bledsoe Elementary School, and his colleagues covers adding and subtracting decimals: 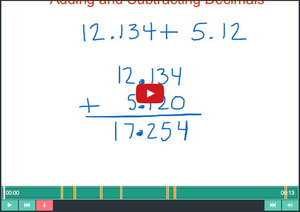 One thought on “How Teachers Can Create Videos That Engage Students”