Classroom disruption: Is blame the answer?

In a windowless classroom on the South Side of Chicago, complete with posters of math formulas and motivating quotes, a fascinating yet common struggle for power unfolds between a young teacher and a crowd of rambunctious students. Five minutes after class begins, during a quiet “do now” period, a student releases a joke that gets half the class roaring in laughter. In response, the teacher raises his voice and asks for calm. Much to his chagrin, viral pockets of side chatter begin popping up in all corners of the room and the teacher’s initial redirection has failed. Mr. Johnson resorts to calling out the names of guilty parties, but as he does so, he is rebuffed by multiple cries of dissent, vehemently opposing his accusations and protesting the consequences the he assigns. While Mr. Johnson and his students debate the disruption, the whole class devolves into social time and chaos. For me, as a paraprofessional inside the classroom, two thoughts came to mind: accountability is incredibly difficult to bring forth in real time, without losing control of the entire classroom; and some of these kids are really disrespectful.

Are parents the problem?

In a similar vein, when posting about the achievement gap on social media, a facebook friend relayed how his Teach For America friend often talked about how “bad” students are. The students were apparently so disruptive that she could never properly do her job. Following a similar hypothesis, while guest lecturing to a classroom of college students in a teacher-education program, a student passionately posited that parental responsibility is what we should focus on: “Parents need to be teaching their students morals, and not to disrespect teachers.” As someone who has witnessed classroom instruction in urban schools and taught a class, I can see how the visceral reaction to disruption is to blame students and possibly even parenting.

When I came through K-12 public school, a teacher’s stern words, glance, or intimation of a referral was usually enough to placate even the most disruptive of students. Rarely did students actually receive referrals and those who did get into this type of trouble seemed to me a small slice of the school population. Nevertheless, one set of experiences drastically and permanently changed my paradigm on this matter.

Same Students, Different Outcomes
In Chicago, my job as a paraprofessional required me to track, support, and monitor the same cohort of 30 freshman students throughout an entire year. I was often required to sit with the same students in different classrooms throughout a school day. To my surprise, I realized that some of the same students who were chronically disruptive in one classroom, were completely quiet, attentive, and engaged in other classrooms. The difference in behavior was astonishing. The only divergent variable between an engaged student and disruptive student seemed to be the teacher and the teaching style employed.

The teachers who engaged my students used an array of techniques: commanding voice, compelling material, reward systems, and assigned seating. When students entered those classrooms they exemplified respect, order, and motivation to learn. This first-hand experience led me to realize that we can blame students and parents, but a highly-effective teacher can engage and manage even the most challenging students. Furthermore, through heavy interaction with guardians throughout the school year, I realized that these students are highly respectful of their parents. In fact, calling a student’s parent was one of the most effective consequences at my disposal. Nothing in my experience reflected guardians without morals failing to demand respect from their children. On the contrary&mdash;I witnessed guardians who were loving, caring, and heavily invested in the future of their students.
Apples to Oranges
A lot of people, myself included, think about their own experience as students and don’t remember 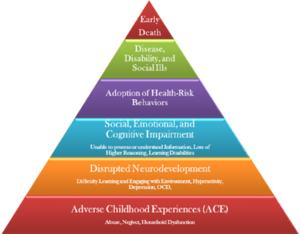 chronic disruption. Sometimes, as in my case, that is because we did not attend schools in low-income neighborhoods with a population of students who were primarily low-income. Children in low-income households experience a high number of Adverse Childhood Experiences (ACEs) that range from a member of the household being incarcerated, to living in a single-parent home, to facing emotional and physical abuse. A massive study conducted with 17,000 participants definitively showed that social, emotional, cognitive, and health problems increase in strong correlation with the increase of Adverse Childhood Experiences. This means that low-income students encounter numerous risk factors that impact their behavior and well-being. The outcome of those ACEs is often borne out at school. Moreover, many of these students live in hyper-violent neighborhoods where they are conditioned to be on-edge, defensive, and impetuous as a means of survival. Traversing gang infested streets on public transportation throughout neighborhoods that are pervasively hostile is a reality that heavily affects the behavior of students, often in ways that can be interpreted as disrespectful and disruptive.
Overcoming Disruption

It seems that while low-income students may often be disruptive, disrespect is not the root. Additionally, highly-effective teachers can manage and teach all students at high levels, even ones with disruptive tendencies, by executing a number of high-impact pedagogies and strategies. One of the main reasons I created EdConnective is to help equip teachers with high-impact strategies to provide command and dexterity within the most challenging classrooms.

3 thoughts on “The Myth and Reality of ‘Disruptive Students’”