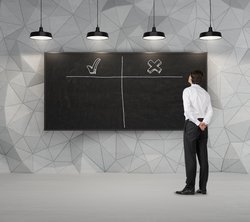 NO. Its not something that entrepreneurs are used to saying. Every moment of the entrepreneur life cycle is typically marked by extreme urgency. The startup journey is all too often meteoric and frighteningly ephemeral. Every lead, every conference, every program, is ripe with potential for success. In this space, I’ve found it exceptionally difficult to turn down opportunities. What if this next meeting will be the one that puts the venture on the map? When I started EdConnective a couple years ago, I found myself always in this frame of mind, fueled by bright horizons and an unquenchable desire to succeed. However, now, I am starting to approach entrepreneurship a little differently.

I recently had the chance to attend and exhibit at an ed-tech conference in Washington, D.C. but turned down the invite.

Why? Because the conference was only two days away. I’ve learned the hard way that some opportunities are only worthwhile after due diligence is completed. I used to wing it sometimes, throwing “Hail Mary” passes down field, hoping to score big. In doing so, I underestimated what it takes to do some things well. For instance, I would go to a conference, set up a couple posters and attempt to reel in potential customers. Hours later, fatigued, frustrated, and customer-less, I realized that I hadn’t done enough prep work.

While talking to other vendors at the conference, including those from big publishing companies, IT companies and such, I was told thing like, “I had several meetings set up with attendees of the conference before we ever arrived. If you haven’t done that…you are pretty much wasting your time.” The feedback was extreme, but the other vendors made their point: be more prepared. Doing really well in the startup space takes an extraordinary amount of diligence and attention to detail. It’s taken me a while to truly understand that.

Turning down the tempo is difficult but usign that time to retool and to become more sophisticated in our work is something I’m learning from my colleagues at the Village Capital EdTech Accelerator, where I am being mentored and tutored in the art of the startup. Some of the people in this program have already managed to reach thousands of clients across the nation with their startup, an extraordinary feat. When inquiring about the secret to their success, they’ve shared some extremely valuable tips, which all have one thing in common: more prep, more diligence, more attention to detail.