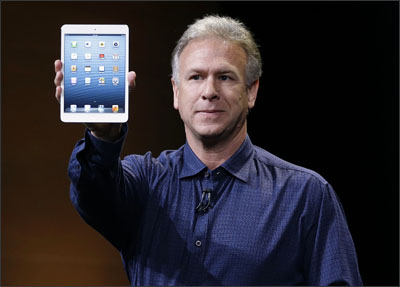 While it may not be an intended outcome when Apple launched its iPad tablet device in 2010, K-12 schools seem to love the thing. iPads sales in K-12 schools are now twice the amount of Macs, Apple’s desktop counterpart, the company’s chief executive officer, Tim Cook, announced in July. (On Tuesday, he announced that 100 million iPads have been sold worldwide.)

So when word leaked this week that the company would be unveiling a smaller, cheaper version of its iPad—in typical Apple fashion, at an invite-only presentation in a San Jose auditorium, live-streaming online around the world— the education world took notice.

Here are the details. Yes, Apple announced a new “iPad Mini,” a tablet that is 7.2 millimeters wide, 0.68 pounds, and with a 7.8-inch screen. That’s 25 percent thinner, 50 percent lighter, and two inches smaller in screen size than the regular-sized iPad. The iPad Mini is touted as offering the same functions and display as the regular iPad (both have displays of 1024 by 768 pixels; 10-hour battery life) but with more portability. So a digital textbook or learning app will appear the same on an iPad Mini as it does on a regular iPad, Phil Schiller, Apple’s senior vice president of worldwide product marketing, said during the event.

Apple also unveiled a new 13-inch MacBook Pro laptop with retina display that starts at $1,700 each, and a new iMac desktop computer that starts at $1,299 and features a “Fusion Drive,” which is a hybrid of flash storage and a hard drive that runs faster than its existing options.

The iPad Mini starts at $329 for a Wi-Fi-enabled tablet with 16 gigabytes of memory; a device with Wi-Fi and cellular connectivity, useful for students without Internet at home, starts at $459. Regular iPads for K-12 schools run between $379 and $829, depending on the model and specifications.

As much as schools have embraced the iPad, technology specialists have told me the costs of the devices can be prohibitive, especially in the case of 1-to-1 learning environments.

“The iPad is the gold standard,” Jay McPhail, the director of instructional technology for California’s Riverside school district, told me in May for a story on the costs of digital textbooks. “But the problem is the schools don’t have any gold.”

Even Cook acknowledged in a July conference call that costs needed to come down for all schools to take advantage of the technology.

“The reason that we [adopted a lower price point for the iPad 2] was because we believed that sales would be incrementally larger if there was price elasticity. We knew there were buyers that really wanted the best product, but needed it to be a little less expensive. … And I think it’s particularly helping in K-12.”

As a result, other tablet makers have entered the schools market with cheaper devices. Amazon offers a 7-inch Kindle Fire 2 for $149 and recently announced a free tool for teachers and administrators to manage schoolwide Kindle devices. Tablets using Google’s Android operating system are being used in schools as well, some at costs around $200. Barnes and Noble, spurred by a recent $300 million investment from Microsoft, offers a 16-gigabyte Nook Tablet for $249. Datawind, an Indian company, offers a tablet with a 7-inch screen for $40 and, after some early troubles, is selling devices to the Indian government for school use.

During Apple’s live event, Cook introduced the iPad Mini by touting its potential for schools. He said 80 percent of the nation’s “core curricula” is available in iBooks, Apple’s digital bookstore. He showed a glowing quote from James Ponce, the superintendent of schools in McAllen, Texas, which recently purchased 25,000 iPads as part of a $20 million digital learning initiative that I wrote about here. There is also a new version of iBooks, which allows people, including teachers and “not just the big three textbook publishers,” Cook pointed out, to author their own textbooks. He highlighted the ability to include math tools and multi-touch widgets within the e-textbooks, though that functionality is available through other e-textbooks providers.

But overall, one of the big selling points for iPads in education is that the learning experience is better and less burdensome than print textbooks. There is growing support on a national level for the switch. Earlier this year, the U.S. Department of Education and Federal Communications Commission unveiled a “Digital Textbook Playbook” that encouraged schools to switch to all digital materials by 2017—in a recent report the State Education Technology Directors Association followed that recommendation.

But the playbook based the alleged annual cost savings on a tablet that costs $250. And even if the iPad Mini price is more inclusive to schools, Apple may find the reduced specifications problematic for schools.

The Smarter Balanced Assessment Consortium (SBAC) and the Partnership for Assessment of Readiness for College and Careers (PARCC), the consortia overseeing the online assessments that are part of the Common Core State Standards, set guidelines that call for a minimum screen size of 9.5 inches for the common assessments. Whether schools opt for devices that are catered toward the assessments remains to be seen.

As with most Apple product announcement events, the Internet, especially Twitter, was paying close attention. Here is some education-related reaction to the iPad Mini. Feel free to leave your own in the comments.