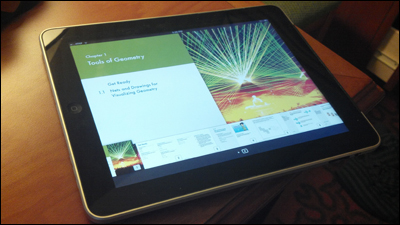 If you remember, Pearson, McGraw-Hill and Houghton Mifflin Harcourt partnered with Apple in January to provide e-textbooks for the new iBooks 2 application on the iPad. On Tuesday, Mike Evans, a senior vice president at Pearson, gave attendees at the South by Southwest education conference (SXSWedu) in Austin, Texas, a closer look of how the textbooks actually work.

The audience seemed to leave with more questions than answers about the e-textbooks, seen as a leading example of education innovation by members of the media, bloggers and, oh yeah, the U.S. Secretary of Education.

Pearson offers four different e-textbooks exclusive to the iBooks, with more expected down the road. (iBooks is the revamped bookstore application offered by Apple, similar to its App Store.) They are interactive, with 3-D graphics, digital notetaking capabilities, and animation-based assessment (some of which must be completed offline).

But despite the hype around its Apple e-textbooks, Evans noted that Pearson offers 300 other digital titles for other platforms. Some of the mainstream media treated the Apple announcement as the first interactive digital textbook ever, but these have been around for awhile, in different iterations.

And as some audience members pointed out Tuesday, Pearson’s e-textbooks look a lot like print textbooks, only fancier and with moving parts.

“The content dissemination is pretty much the same,” one man in the audience commented. “The only advantage I can see is the navigation.”

This seems to be a critical point. The aforementioned U.S. Secretary announced plans to have digital textbooks in every classroom. But it must be questioned whether those digital textbooks actually transform learning for the better, or if they are simply digital re-creations of print textbooks—a mere form of spinal relief.

That’s likely where the pricing becomes key. If it’s cheaper to purchase e-textbooks, it becomes somewhat of a moot point if the experience is the same. But if it’s not, districts will question whether the e-textbooks are as innovative as they should be for the price.

Evans explained that each e-textbook is offered on iBooks for $14.99.

When the district purchases the books, each student is given an individual license for it. That textbook, and all of the updates, belong to that student for life (so when you need that Geometry textbook 20 years later…). Evans told me after the session that Pearson and Apple often co-sell to districts—promoting iPads for the classrooms and the e-textbooks that live on them—but they haven’t joined forces to bundle products yet.

The break-even point is about six years, Evans said. That’s roughly the lifespan of a print textbook, which is much more expensive but can’t be updated.

There’s been some dispute to these numbers. Lee Wilson, a veteran of the education industry, blogged exhaustively that Apple e-textbooks actually cost six-to-seven times more than print textbooks. Using estimated data from his own experience and from technology directors, he determined Apple textbooks cost $71.55 per student, per class, as opposed to $14.26 for print textbooks. He factored purchase of the devices into cost. (I urge you to read his post, and his follow-up, and judge the numbers yourself.)

He also hinted at more dynamic versions of the textbooks, that integrate with other Pearson classroom technology, like its assessment tools and social learning products.

“We see this as a step in the journey,” Evans said. “It’s not mission accomplished.”

Either way, if the price tag for iPads and e-textbooks ends up being too costly and districts aren’t seeing much of a different from their print past, meeting Arne Duncan’s digital textbook goals may be tough.

2 thoughts on “Live From SXSWedu: A Closer Look at Pearson’s E-Textbooks”