One of the main goals of the League of Innovative Schools, part of an independent nonprofit organization created by Congress to spur innovation in education, is to improve the way school districts purchase technology by creating a national network of forward-looking schools that can share each other’s buying experiences and purchase and test products together. It’s a lofty goal—policies regulating technology purchasing and adoption of instructional materials vary widely from state-to-state and relationships between districts and vendors can be insular.

But on Wednesday, the League of Innovative Schools announced a first step toward the goal of establishing a national network of purchasers. School districts participating in the league have banded together and entered an agreement with Discovery Education to pilot the company’s new electronic social studies textbook in middle schools this year. Every middle school within the league’s roughly 20 school district members are eligible for the pilot, which will provide Discovery’s social studies

“Techbook” for free, including professional development.

“The idea is to help make the educators in the districts smarter consumers,” said Adam Frankel, the executive director of Digital Promise, a nonprofit organization based in Washington that advocates for digital learning and created the league, in a phone interview. “And not just for the sake of it, but so they know they are buying things that make a difference in the lives of students.”

Because the partnership was just announced, Discovery is still talking with districts to enlist them for the pilot. Terms for potential purchases following the pilot have not been ironed out yet either, said Coni Rechner, a senior vice president for Discovery Education, a division of Discovery Communications, a Silver Spring, Md.-based media company.

The deal gives schools a chance to test a new piece of technology and curriculum for free, to see if it is effective, and to determine if it fits with curriculum and doesn’t overwhelm technology infrastructure. For Discovery, the company can put its new line of highly touted e-textbooks in front of technologically savvy districts with an inside track at a major purchase.

It is the first league-wide pilot of a technology product since the organization began operating about a year ago. (For more on the league, read my story from March.) It is also the first multi-district pilot for Discovery since it launched the Techbooks at the beginning of the 2011-12 school year, Rechner said. Last year, 200,000 students and teachers had access to the e-textbooks, including League of Innovative Schools member Mooresville, N.C., according to the company. 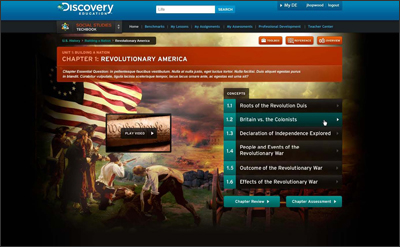 Techbooks are typically offered for $35 to $55 each, and include interactive elements, assessments, and access to content from Discovery Communications’ wide range of media offerings. The e-textbooks can be used on any device, certainly a key factor in the products being used by a wide network of schools simultaneously. For each school that participates, Discovery will provide one day of on-site professional development and a few subsequent webinars to help teachers learn how to use the Techbooks.

The entrance into curriculum is an unprecedented move and major investment for the company, which licenses content from dozens of publishers and employs a sales force to sell the books.

Perhaps that attitude allows, or even persuades, Discovery to offer products and professional development for free on such a wide scale.

Depending on how many schools decide to participate, the pilot could be considerably larger than those offered by the “big three” publishers—Pearson, McGraw-Hill, and Houghton Mifflin Harcourt, all of which do offer pilot programs for their own products.

“They are building the confidence to make the transition,” she said.