Education is full of discrete processes, systems, and tasks. As such, many education startups create products to solve inefficiencies within those processes—by offering what’s known as “software as a service,” or SaaS— rather than reinvent the wheel. Schools have a problem doing X, so company Y is here to make X easier. Parchment, a Scottsdale, Ariz.-based software company that helps high schools send electronic transcripts to colleges, falls into that category: college transcripts are a hassle to manage, so Parchment makes it easier to do so.

On its surface, Parchment provides a simple electronic interface for schools to upload student records, mainly transcripts, and turn the data into a common format that can be sent out to colleges. And it allows colleges to request those transcripts electronically.

But oftentimes it is the secondary service that a company provides that will determine how successful it becomes. In Parchment’s case, managing transcripts is the hook, but the real value is analyzing the data it gets through those transcripts to help universities, high schools, and students make decisions about admissions and enrollment, Pittinsky said. The money Parchment recently raised will go toward research and development into those services, which Pittinsky hopes will improve the overall college guidance and admissions process, not just the annoyance of sending paper transcripts.

For students, that means analyzing the data throughout Parchment’s system to show which schools students with similar backgrounds have applied to and what their rate of admission is. For colleges, it means targeting which secondary schools have higher concentrations of their applicants, and which other colleges are asking for the same transcripts.

Ultimately, Pittinsky sees outside developers building apps into Parchment to help students and colleges make better admissions decisions (the company is vigilant in pointing out the network is secure, so student data is not compromised).

There is, however, the issue of whether college transcripts are even the best way to judge a student’s college readiness. Schools and curriculum writers are constantly redefining what that term means. “Transcripts are great,” Pittinsky said, “but they are incomplete.”

By incorporating credentials not included in transcripts—like, say, completing a free online course with Coursera, or badges from other educational programs like Codecademy, CourseHorse, or Skillshare— and having each individual’s profile follow him or her throughout school and career, Parchment wants to become something of a one-stop shop for college and corporate recruiting. 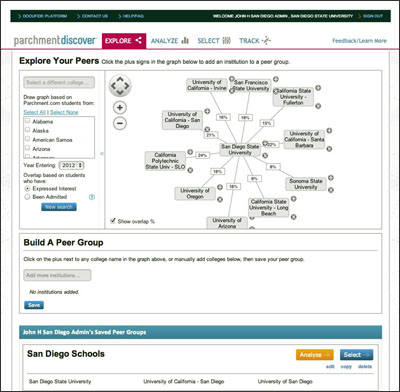 Suddenly, we’re a long way from managing college transcripts. Pittinsky is a veteran of education technology who co-founded Blackboard Inc. in 1997 as a company that simply allowed teachers to create websites for their classes (he left the company in 2008). Now the company offers entire learning management systems with tools for analyzing student data (and with CEO Michael Chasen’s decision to step down, it will have shed all of its original co-founders). Blackboard is criticized for trying to do everything for everyone and becoming too bulky in the process, but it certainly sets a model for education companies looking to start as a service and grow into something much larger.

Education is a great market for that approach, Pittinsky said. By solving simple problems for a small group of educators, companies can quickly figure out if their product is useful, he said.

“It’s like the Broadway show,” he said. “You can first test it in Buffalo and then bring it to Broadway.”

But there has to be a clear path to Broadway. Pittinsky categorizes most ed-tech startups as “companies” and “features.” He views Blackboard and Parchment as “companies.” “Features” masquerade as companies but serve only one function (i.e. only college transcript management).

“Companies” can thrive, but because the modern education market is in relatively early stages and there aren’t many large companies that can acquire startups, “features” without a bigger vision tend to fizzle out.

For all the complaints about the education market being difficult to navigate, Pittinsky believes it is actually beneficial for the “companies,” those that can prove to educators they can solve many problems, not just one.

“I always get so frustrated when entrepreneurs or investors complain about the K-12 education market,” Pittinsky said. “The flipside is, there’s an on-ramp. There’s a bottom-up, grassroots approach to prove what you are doing.”