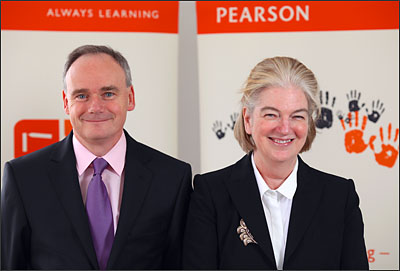 In a surprising move that signals the significant changes going on in the educational publishing industry, Pearson announced Wednesday that Chief Executive Office Marjorie Scardino will step down at the end of the year.

John Fallon, 50, the chief executive of Pearson’s international education division since 2008, will take over as CEO on Jan. 1. Scardino, 65, has been CEO at Pearson, based in London and New York City, since 1997.

With the move, each of the “big three” educational publishers—Pearson, McGraw-Hill, and Houghton Mifflin Harcourt—will have named or appointed new high-level executives in the past 13 months, a sign the industry is undergoing significant upheaval in the face of emerging technology, school financial pressure, and a globalized education landscape. Those three companies account for roughly 90 percent of educational publishing sales.

Scardino is credited with transforming Pearson into the
education leader it’s become, by selling some of its entertainment and financial properties and completing large acquisitions, most notably Simon & Schuster’s education publishing properties and, in 2001, National Computer Systems Inc., the leading test-scoring company in K-12 test at the time. Those two acquisitions cost a combined $7 billion. In recent years Scardino oversaw the company’s move from a textbook publisher to a digital learning company.

In a statement, she said:

“Though we’ve changed the company beyond recognition from its form in 1997, we are still in the foothills of the climb to make all kinds of learning more accessible and more effective for more people. I know that John, the board, the senior team, and our 40,000 people have the bravery, imagination, and decency to lead the company to new ways of achieving these goals, while holding on to the traditions and values that make Pearson unique.”

The difference in Scardino and Fallon’s backgrounds could signal the company’s plans moving forward.

Scardino’s roots are in publishing; the Texas native came to Pearson after serving as CEO of The Economist Group and as publisher of a newspaper in Georgia, becoming the first female to lead one of London’s largest companies. Fallon began at Pearson in 1997 as director of communications and eventually became CEO of its international education division, first focusing on publishing and then on assessment, technology, and Pearson’s growing businesses in emerging markets.

Wednesday’s announcement led to speculation that Pearson would sell its major non-educational assets, such as the Financial Times or Penguin, its
trade publishing division, to focus almost exclusively on its education business, especially in international markets.

In an interview from England, Fallon said he would like to continue the vision set forth by Scardino and other top Pearson executives he’s worked with over the years. But he said in the coming months he would spend time “getting to know the North American business much better” and meeting with customers and policymakers. Despite his background in international education and the globalizing education landscape, Fallon said his appointment did not mean Pearson would deprive its U.S. business of attention or resources.

“I wouldn’t underestimate the continuing importance of local culture,” in U.S. education, Fallon said. But still, there is “increasing recognition that the challenges faced are shared by others around the world.”

One of Fallon’s challenges is replacing the charisma of Scardino, the public face of the company and a constant presence in the U.S., said Frank Catalano, an education consultant who worked as a senior vice president of marketing for Pearson from 2004 to 2008. Fallon, who is English, is less known within the U.S. education market, where there is a wariness of Pearson’s growing control over public education, Catalano said. In recent years, the company has been criticized for its lobbying efforts, allegations of unethical relationships with education officials, and investments in and acquisitions of early stage companies and organizations.

“Pearson right now is getting a bad rap, whether deserved or undeserved, for coming in, like IBM and Microsoft once did [in technology], and owning the digital education and startup ecosystem,” Catalano said. “Marjorie was a humanizing counterbalance to that.”

Fallon acknowledged there is work to be done assuaging some of those fears.

“Yes we are a profit-making enterprise but the profits are a byproduct of doing something that’s important and useful to society,” he said.

At about $4.2 billion, North American education is still Pearson’s largest business, accounting for nearly half its roughly $9.5 billion in overall revenue for 2011, but it’s been stagnant over the past few years, leading to speculation that Scardino would step down. Pearson owes that stagnation in K-12 education to a stall in the adoption of instructional materials ahead of the Common Core State Standards and school budgets becoming
tighter.

In July, Pearson acquired GlobalEnglish, a company that provides digital English language instruction for businesspeople, for $90 million. Last year, it acquired Global Education and Technology Group, which provides English language test prep services, for $155 million, and purchased a controlling stake in TutorVista, an education company that manages schools in India. The company and its subsidiaries operate English language learning centers in China, manage schools in Brazil, run an online university in Mexico, and invest in private schools in Ghana. International education revenue this year is expected to
exceed last year’s mark.

Scardino “took a venerable British institution, which was then an important Anglo-American institution, and has led it to becoming a fairly serious global company,” the company’s board chairman Glen Moreno said in a video interview posted by Pearson. “And that global growth is just beginning. It really is. There are huge opportunities ahead
of us.”

This year, McGraw-Hill named Lloyd Waterhouse, a technology and education executive, the CEO of its education division, which it will spin off into an independent company at the end of year amid speculation it could be sold. Houghton Mifflin Harcourt, which in September 2011 welcomed new CEO Linda Zecher, a former executive at Microsoft, recently emerged from a voluntary chapter 11 bankruptcy filing. And, perhaps sensing an opportunity, international media conglomerate News Corporation invested upwards of $70 million into Amplify, its new education business led by Joel Klein, the former chancellor of the New York City public schools.

When asked by the Financial Times, a newspaper owned by Pearson, what she would do next, Scardino said, “wait and see” and that she “would like to work a bit more.”

In the video interview posted by Pearson, Moreno said earlier this year Scardino informed the board that she was considering leaving the company. As for her successor, Moreno said: “We did track people outside of the business over quite an extended period, and at the end of the day felt: hey, we’re the market leader, we’ve got the best company, we’ve got really good people, it’s right to go internal.”

Catalano said there had been rumors Scardino would step down for years, but that given her interest in digital learning, he did not expect her to leave as the company is in the middle of a transition from publisher to technology company.

“It’s not necessarily a shock but the timing is somewhat of a surprise,” he said.

Pearson stock, which trades on the London and New York stock exchanges, was down slightly as of noon Eastern Time on Wednesday.