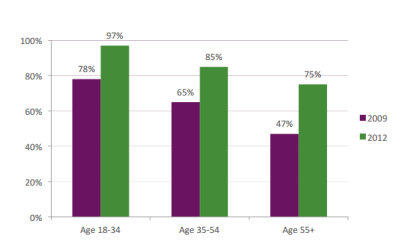 Educator social media use by age. Source: MMS Education.
It’s no secret that educators use social networks in many of the same ways everyone else does, but a new survey shows many educators prefer online communities that cater to their profession instead of those geared toward the masses.

“A Survey of K-12 Educators on Social Networking, Online Communities, and Web 2.0 Tools 2012” was conducted and analyzed by MMS Education, a marketing company based in Newtown, Pa., and sponsored by edWeb, a professional social network for educators, and MCH Strategic Data. There were 694 respondents.

But the survey revealed interesting data on less traditional social network use among educators. For instance, 27 percent of respondents use Edmodo, the social learning site that is as much a classroom management tool as it is a network. That’s up from 3 percent in 2007 and equal to membership on Google+, the search giant’s much-ballyhooed social endeavor. It’s indicative of Edmodo’s rapid rise; the company announced Tuesday it reaches 15 million users. EdWeb.net ranked second behind Edmodo, with 15 percent of respondents.

Companies that provide classroom tools and content are also creating their own social networks, likely to boost engagement with their products. In the survey’s biggest surprise, 52 percent of respondents who use a social network were also members of Discovery Education Network, an online forum created by the international media company.

These numbers show domains tailored to the teaching profession are making headway against general social networks, which are often blocked in schools and prohibited for student-educator connections. Members of education-specific networks use them more frequently than members of general networks, and respondents said they are more likely to join an education-specific social network in the next year than a general one.

Frequency of use among educators for education-specific social networks. Source: MMS Education.

Frequency of use among educators for general social networks. Source: MMS Education. This is good news for a recent slew of startup companies looking to provide educator-specific online forums. Tioki brands itself as the LinkedIn for educators and often cites that network’s shortcomings for this specific audience. SmarterCookie and EdThena provide variations on the concept of a social network for professional development and teacher coaching. (I recently profiled Tioki and SmarterCookie.)

The top activity for educators on social networks is connecting with friends and family, in line with that of the population at-large. But the second biggest use of social networks is to share information and resources. The Web is transforming how teachers find classroom materials, technology tools, and lesson plans, and this data shows social networks often serve as the forum for that activity.

The study suggests there is value in social networks catered to educators beyond information-sharing. Eighty-four percent of respondents said general social networks like Facebook and Twitter brought privacy concerns, while only 45 percent held that concern for education-specific networks.

“There’s a sense they feel safer in the education sites,” said Susan Meell, the chief executive officer of MMS Education, in a phone interview. My colleague, Michelle Davis, has written about the increasing popularity of “safe” social networks for educators.

Finally, 82 percent of respondents said social networks were very valuable or somewhat valuable for finding information about products and services. Last week, I wrote about education technology companies increasingly looking to teachers for marketing and product development. The intention is to use modern modes of communications to find out what teachers want, build web-based technology that can easily spread, and then use the critical mass to influence district purchasing.

This survey shows that social networks may be the conduit for spreading information about those tools, but educators will have to dig deeper than Facebook or Twitter to gain access.