Preparing students for 21st-century jobs that have yet to be imagined will require teaching “soft skills” and new teaching strategies, a worldwide study by the Economist’s Intelligence Unit found.

The research, sponsored by Google for Education, also looked at the role educational technology can play in this transformation. Drawing from surveys from 1,200 educators in 16 countries, interviews with experts, and other sources, the five key takeaways from the study, as summarized by the Economist Intelligence Unit, are:

The “Fostering Exploration and Excellence in 21st Century Schools” study was released during the Bett show in London last week.

Some of its themes resonate with Education Week‘s findings in our special report, Schools and the Future of Work, including “The Future of Work is Uncertain: Schools Should Worry Now,” and “Preparing Students for Tomorrow’s Jobs: 10 Experts Offer Advice to Educators.”

Here are several charts that summarize the findings from the educator portion of the study.

Long-held practices for teaching and learning are some of the least-effective ways to help students with workplace-ready skills, according to the educators themselves.

Educators said the best way to help students acquire the skills they will need in the workplace is with “active learning,” in which students are engaged in activities like reading, writing, discussion or problem-solving.

That was followed by project-based learning and “cognitive activation,” in which students are encouraged to focus on how they reached an answer, rather than the solution itself.

Personalized learning, a strategy favored by many educators in the U.S., was in the middle of the pack, with 40 percent of educators calling it a “very important strategy,” and only 28 percent rating it “most effective.” (Education Week delved into this topic recently in a special report called Personalized Learning: Vision vs. Reality.)

See how each of these strategies ranked below.

Educational technology was seen as being a helpful tool, but not a panacea, for addressing the need for workplace skills. Educators indicated that technology could be “very” or “somewhat” effective in supporting the strategies outlined above.

Teachers said educational games are the second most effective technology in the classroom—32 percent favored them—after laptops (35 percent) for the strategies identified, the study found. Interactive whiteboards were the third most popular technology, with 29 percent of respondents choosing it, followed by educational videos and tablets and/or e-readers, which were tied at 27 percent.

At the bottom of the list? Open education resources at 20 percent, and mobile phones, 13 percent.

The chart below defines teachers’ opinions of effective technologies.

Researchers asked educators how prepared the teachers at their schools are in teaching certain skills that are deemed necessary in the workforce.

In schools where teachers are given the most autonomy, the respondents consistently expressed higher confidence in their colleagues’ abilities to teach the skills, compared to those from schools with lower levels of autonomy. The study pointed to countries with top-performing education systems like Finland and Singapore, and noted that teaching is highly regarded as a profession in those countries. Good students are encouraged to become teachers there, as well.

Even for the skill of teaching foundational literacies, including math, science, and reading, educators in schools where teachers had the least autonomy were considered “well-equipped” to handle the subject matter, the study found.

The following chart describes these perceptions.

What Works Best in Professional Development

Another topic tackled in the study was the question of how teachers prefer to learn themselves. Here, the strategy of teachers personalizing their own learning took the top spot, although large-group training and project-based learning tied as a close second.

Online courses, conferences, and measuring competencies against a set of standards received the lowest scores. 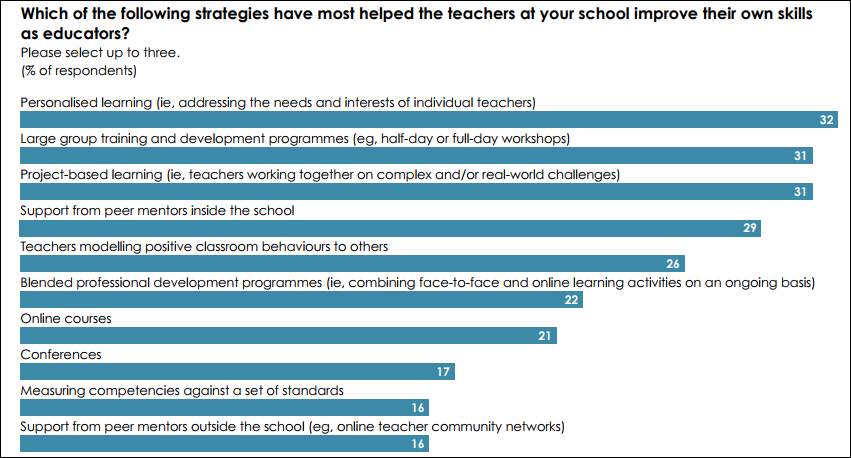 “Fostering Exploration and Excellence in 21st Century Schools” can be downloaded here.

One thought on “5 Insights to Help Prepare Students for the Future of Work, From the Economist and Google”