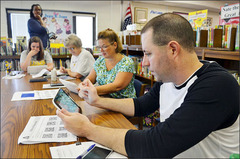 Amplify, a New York-based ed-tech company, may be on the verge of abandoning the sale of its tablets for K-12 education.

BloombergBusiness reported Friday that News Corp., the parent company of Amplify, is “winding down school tablet sales,” based on information from two sources. The publication indicated that Amplify is not ordering new Android-based tablets from its Asian supplier, but that its existing inventory of tablets is available for schools.

In an emailed response to Education Week’s inquiry about the report, a spokesman for Amplify replied that the company “continues to support our tablet customers,” and that it is still “fulfilling orders for additional tablets.” At the same time, the spokesman said that Amplify “continues to receive and consider new contract requests for the tablet.”

While the sale of devices represents part of Amplify’s business, the sale of curriculum and testing services is the other part. The company spokesman said that, in that part of its business, Amplify has “several million dollars of new sales in Amplify Learning, primarily in English/language arts.” That figure also includes some sales for math and science, he said, “even before we have formally launched those products.”

BloombergBusiness reported that, by the end of June, “New York-based News Corp. will have invested more than $1 billion in Amplify, its education division.”

The sale of Amplify’s tablets got off to a rocky start when its largest deployment—in Greensboro, N.C.’s Guilford County schools—was beset with so many hardware issues that the district suspended its 1-to-1 computing initiative. Amplify addressed the problems by making the tablets more durable, and by January 2015, a district instructional technology official reported being “satisfied and pleased” with the technology, allowing the district to move on to the “instructional” part of its mission. At that time, Amplify officials told my colleague, Ben Herold, that the company had about 30,000 tablets in circulation in U.S. K-12 schools.

The BloombergBusiness report about Amplify comes as tablet sales in education are declining in general, as Chromebooks gain sales and popularity in K-12 classrooms. It also comes on the eve of ISTE 2015—the largest gathering of education technology enthusiasts in the U.S. The company spokesman said Amplify will be well-represented at ISTE, although the company did not release advance press coverage about products that will be showcased there.

By comparison, Amplify touted its educational offerings at two SXSWedu conferences—first unveiling the tablets in 2013, then, the following year, announcing a yearlong digital curriculum for middle school English/language arts that incorporated multimedia tools and educational games with an algorithm-based analytics system.

(Note: The president of Amplify Learning, Larry Berger, serves on the board of Editorial Projects in Education, the nonprofit corporation that publishes Education Week. Berger co-founded Wireless Generation, which is now part of Amplify.)

Photo: Kevin Mash, a math teacher at Johnson Street Global Studies school in High Point, N.C., works with an Amplify tablet to identify ways to use it in his classroom during training last year for teachers.–Kristin Zachary/The Enterprise/AP-File

3 thoughts on “Amplify Reported to Be Dropping School Tablet Business”