For the past seven years, an organization called the Charter School Growth Fund has been providing those schools with millions of dollars in grants and low-interest loans, after putting them through a screening process to try to gauge whether their promise is worth the investment.

Apparently, that screening process is producing benefits, at least according to the results of a new, nationwide study. That analysis found that schools supported by the growth fund produced greater academic gains than both traditional public schools and other charter networks.

The findings were included in the Center for Research on Education Outcomes’ Charter School Growth and Replication study, released this week. While much of the study focuses on the performance of individual charter schools, charter management organizations, and organizations hired to operate those schools, the authors also included a separate analysis about the Charter School Growth Fund, which they say intrigued them for a number of reasons.

The fund draws from a wide range of charter school applicants across states, and “has the benefit of a decade of developed institutional knowledge,” the Stanford University researchers explained. They were thus interested in an examination of the performance of the charter networks the fund supported.

The Charter School Growth Fund, a nonprofit philanthropic organization, channels donations from foundations and wealthy individuals into helping charters expand, typically from a school or two into larger, multi-school networks. Since 2006, the organization has given between $160 million and $170 million in grants and loans to charters, Kevin Hall, the organization’s chief executive officer, told Education Week. Its average awards typically range from $1.5 million to $7 million over a number of years, he estimated.

Today, the organization says it supports 34 charter management organizations operating more than 300 schools in 17 states, serving 125,000 students. Its beneficiaries include charter organizations such as YES Prep, Rocketship Education, and Noble Network of Charter Schools, among many others.

The growth fund does not try to dictate the academic strategies and other policies at the charters it supports, though it helps them refine those strategies, Hall explained. Nor does it expect the charters it backs to be problem-free from their inception. However, the growth fund typically backs charters only after they’ve shown at least three years of good results, he said.

The Stanford University study examined the results for 73,000 students in 14 charter networks backed by the growth fund. They compared learning gains for students in growth-fund schools against others in charter management organizations that did not receive money. And they benchmarked those results against students in traditional public schools that the charter students would otherwise have attended, using a method called the “virtual control record.”

Students in growth-fund schools produced much larger gains in math than those in both other charter networks and in regular public schools. Growth-fund students also outpaced their peers by “smaller but still dramatic” margins, the researchers found.

One of the study’s authors, James L. Woodworth, said it was important to note that the performance of growth-fund-supported schools was the same before and after they received the money.

“That indicates it was not the additional money from the growth fund which led to the better performance,” Woodworth said in an e-mail. “Instead, growth-fund money enabled those networks to add more seats specifically for under-served students.”

A comparison of the learning gains in growth fund, and comparison schools, is shown below, measured in standard deviations: 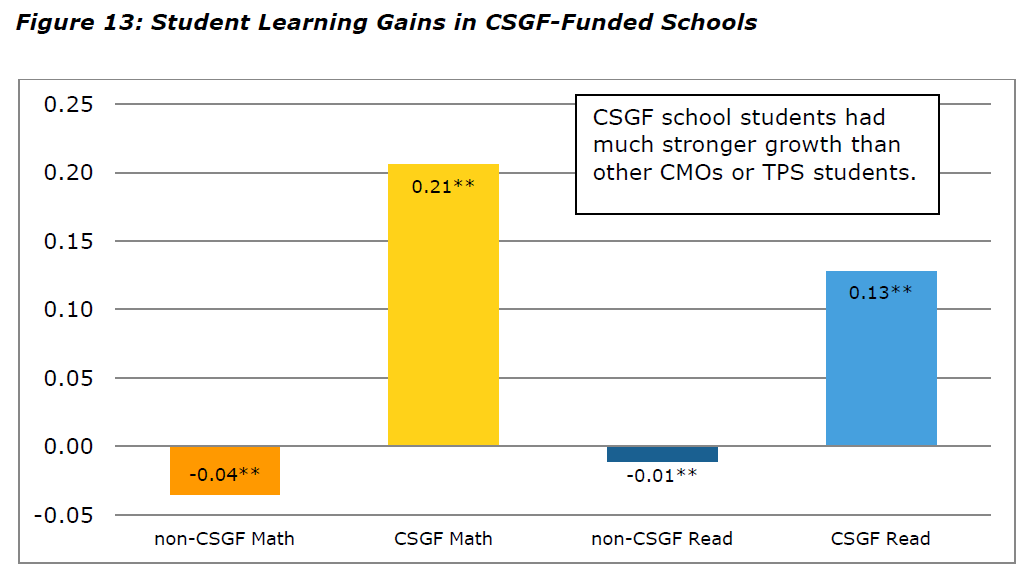