A major cable and Internet corporation is joining with one of the nation’s best-known sources of free, open-education resources to try to expand access to the Web and online content for impoverished students and families.

The partnership brings together Comcast, which describes itself as the nation’s largest provider of video, high-speed Web access, and phone service to residential customers, and Khan Academy, a nonprofit that estimates it has delivered 330 million online lessons to date.

Comcast runs Internet Essentials, which provides discounted broadband service, for $9.95 a month, to impoverished families who have at least one child in the National School Lunch Program.

The Philadelphia-based company says 98 percent of subscribers through that program have indicated their children use the Web for homework—which suggests to Comcast officials that channeling materials offered by Khan to those families would hit the mark. 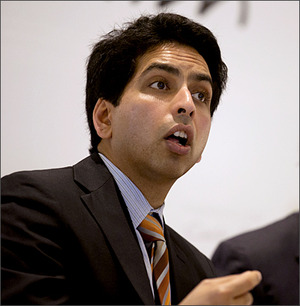 Essentially, Comcast and Khan will be using their extensive reach through various media to tout each other’s resources among needy families.

Khan will develop public service announcements about its online courses and how they can be accessed through the Internet Essentials program, said Salman Khan, the organization’s founder, in an online interview accompanying the announcement.

Comcast, in turn, will promote the resources available through Khan Academy, which reports that it draws 10 million online users per month, who come seeking academic content across subjects.

That promotion will occur via the Web and television over the next few years, in English and Spanish, Charlie Douglas, a spokesman for the Internet and cable company, told Education Week.

All told, Comcast is committing to make “hundreds of thousands” of public-service announcements each year, Cohen said.

Khan added that his organization is “dependent on the Internet to deliver our personalized learning experience to everyone, everywhere.” Both Comcast and the academy, he said, are interested in “leveling the playing field and equalizing access to educational content.”

Photo of Salman Khan at a news conference at the Soumaya museum in Mexico City earlier this year. By Dario Lopez-Mills/AP-File.