Among more than 30 startups vying for the top spot at the Future of Education Technology Conference’s Pitchfest competition were those focused on coding, reading comprehension, writing and social-emotional learning. Many were crafted around the well-established idea that they could personalize the educational experience for students.

But this year at the 39th annual conference, which draws more than 10,000 attendees, judges of the competition saw something new. Many of the entries for the most innovative ed-tech startup expressed an unequivocal commitment to a social mission, as well as a desire to be profitable.

“This year I was surprised by the number who explicitly stated they had social missions,” said Kyle Steele, founder and CEO of Learn Jelly, which offers coding-based classroom programs, and the program director of Rally, a social enterprise accelerator, who served as one of the judges for the startup contest. “I feel like culturally we’re moving into an area where people are much more socially conscious of what’s going on in the world. As a byproduct, you have entrepreneurs who are really leaning into that.”

The winner of this year’s FETC Pitchfest was Squiggle Park, a Canadian digital gaming platform that promotes reading skills and comprehension for students in grades pre-k through age 12. The company was chosen by a panel of judges as well as the audience.

Julia Dexter, the co-founder and chief marketing officer for Squiggle Park, said the company’s newest offering is called Dreamscape and is designed for children ages 8 to 12. The game is similar to the popular Clash of Clans, except for players have to read passages and answer comprehension question aligned with the curriculum in order to progress. 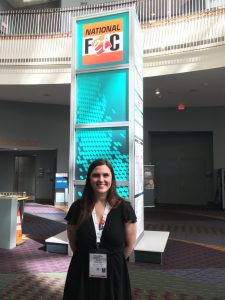 The company is currently in 12,000 schools and has 100,000 registered players and says its products improve reading with just 30 minutes of play per week. In addition, Dreamscape is free for students and schools. At home, students need to purchase a membership, paid for by their families, to unlock fun “extras” that make the game more exciting and enticing. That’s where the revenue is generated.

“It only works if you have games that are so much fun that kids are going to drive the demand,” Dexter said. “If you can get the kids exposed to it in school and it’s awesome, there’s a really high likelihood they will bring it home.”

But none of the educational components of the game cost money, Dexter said, allowing Squiggle Park to subsidize its social mission of spreading an effective reading comprehension tool to low-income and under-served student populations.

“Access is so important to us,” she said. “Our mission is to make sure that every child who can benefit from Squiggle Park can get it in their hands.”

This concept of making money, but also doing good works, is a concept that is becoming more mainstream among entrepreneurs, Steele said. It builds upon successful models in other sectors. Take, for example, Toms, a shoe company that began donating a pair of shoes for every pair of shoes it sold. The company now donates resources around the world. Another example is FIGS Scrubs, which donates hundreds of thousands of scrubs to healthcare providers in countries where medical resources are scarce.

“Earning money is good, but then what do you do with that money is an equally important question,” Steele said. “There’s a generation of people who are saying we want to make money, but we also want to do good.”

Dexter said that model is resonating, particularly with younger entrepreneurs. “In the past it was confusing for people. Are you a for-profit business or a not-for-profit?” she said. “But people are getting it–you can build a successful business with successful revenue without giving up that social enterprise piece.”

With the Pitchfest award, Squiggle Park gets a free booth at FETC for next year. The company also got the opportunity to pitch to about 50 superintendents, administrators, technology directors, and curriculum directors at this year’s event.

Three other companies made the final round of the Pitchfest: Scrible, a platform that helps students learn to research and write; CodeSpark, a female-friendly coding platform; and Cirkled in, a student portfolio platform that allows students to showcase themselves to colleges.