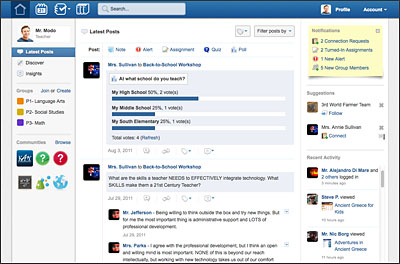 Edmodo, the popular learning management website that is now approaching 10 million worldwide users, is a lot of things: a course manager, a marketplace for education apps, an online gradebook.

But ultimately, it is a social network, a way for teachers to interact with their students, colleagues, and peers. With new features announced Wednesday, Edmodo will look more like the kind of social network teachers and students use at home, but through the lens of school.

In the same way that Facebook users can share photos, links, and video with their friends, teachers using Edmodo will now be able to share lessons. Teachers can connect with other teachers that are teaching the same subjects, and find lessons posted to the site based on grade level and subject. Lessons that are popular or produce certain outcomes can be targeted to teachers seeking that kind of content. 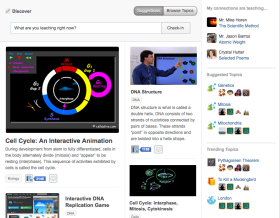 Part of those outcomes and that content discovery process will factor in a new set of data Edmodo will be collecting from students and for teachers. Edmodo Chief Executive Officer Nic Borg said in a phone interview that one of the most requested features by Edmodo’s teacher users is a “Like” button, similar to the one made famous by Facebook. Edmodo expanded on that idea by allowing students and teachers to tag content with a wider range of reactions. Teachers can tag students’ work with insights like “spelling mistakes,” “needs improvement,” or “outstanding.” Students can tag the assessment items and lessons they complete with reactions like “confused,” “awesome,” or “wasn’t in notes.” Teachers can then sort, categorize, and analyze the trends from those reactions to decide what lessons are working.

There is also a new “activity stream” that will look similar to Facebook’s news feed on most users’ homepages. Borg and Edmodo Chief Operating Officer Crystal Hutter were somewhat reluctant to make direct comparisons between these new features and how a social network like Facebook is evolving. Some of these education-specific networks are even referred to as “personal learning networks,” which Education Week contributing writer Robin L. Flanigan wrote about last year.

But it’s clear that in a learning management system market often faulted for how difficult the products are to use, there’s a strategy behind making Edmodo more like the social networks that students and teachers use in their personal lives. Other sites like Lore and Grockit’s new Learnist project apply user experiences from social networks to education. Americans spend about six hours per month on Facebook and about four per month on all Google sites including Gmail, Google+, and YouTube, according to the web research firm comScore. 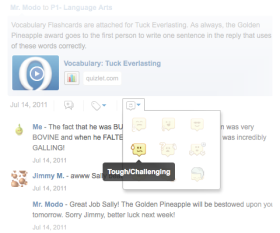 In a recent interview with me, Jeremy Friedman, the CEO of Schoology, an LMS and Edmodo competitor, said his company intentionally took that approach, in part because schools blocked sites like Facebook and Twitter that teachers and students had grown accustomed to using. Why ask them to learn another set of functions and experiences, he asked? When they began pitching the product, which is about two years old, to district leaders, they hated it. But adoption increased because it matched what teachers asked for, Friedman said.

“At the district level they need buy in,” he said. Schoology has about 1 million users, Friedman said.

Edmodo is one of the few widely used learning platforms that doesn’t offer an enterprise product for districts. The product is free for users though teachers and schools can spend money on apps in its marketplace. But the company takes the same teacher-centric approach to its product development. Borg and Hutter said all of the new features were created specifically because of teacher feedback, gained through conversations with users and the company’s annual online conference held in early August.

“The closer you are to the customer and the people using the product, the better the product can be,” Hutter said.

Borg calls the top-down approach of selling to school districts “costly” and “slow.”

“If you take that approach, you’re internal mission is to build things for the people not using the product, just to pay the bills,” he said.
In short, Edmodo’s strategy is to build users before sales, an approach unique to education but successful for companies in the consumer technology sector, like—you guessed it— Facebook and Twitter.