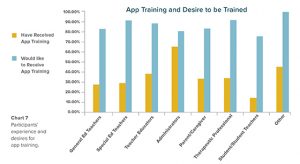 The SpedApps project, created by the Research Center for Educational Technology at Kent State University in Ohio, also features a website that reviews apps developed to reach special education students, as well as two apps created by researchers working on the initiative. The project is funded in part by AT&T.

The report, “Use and Perceptions of Mobile Applications and Technologies by Those Interested in Special Education,” highlights findings from a survey of 683 general and special education teachers, therapeutic professionals (like intervention specialists, school psychologists or occupational therapists), parents of special needs students, and administrators. The researchers also did a review of existing peer-reviewed research that focused on mobile technology and its use with special education students.

Mobile technologies in particular have the ability to resonate with and support the instruction of special education students, said Richard E. Ferdig, summit professor of learning technologies at the research center and a co-author of the report. Teachers can “capitalize on the abilities built into mobile tablets, phones, use talk-to-text, touch screens, and the ability to personalize instruction,” he said. “It can be used in a formal classroom or an informal setting or at home.”

The SpedApps team created a website that reviews apps aimed at special education students’ instruction. It features user ratings, editors’ notes about each app, and an overview of its objectives. The site currently contains reviews for 435 apps, allowing them to be filtered by subject-matter, name, or whether they’re free or for sale.

For example, the SpedApps review of Autimo, an educational game about emotions for students with Autism, contains a description of the app’s goals, an editor’s note saying the app is “likely to be useful as a practice tool for individuals&mdash;young and old&mdash;working to identify emotions and seeking to transfer these skills across different people and contexts.”

The survey by researchers found that a significant number of education professionals&mdash;not just special education teachers&mdash;had received little or no training on ed-tech use for instruction, though the majority said they wanted it. About 30 percent of special education teachers reported no instructional technology training, while 58 percent of therapeutic professionals reported the same. Seventy-two percent of pre-service teachers reported they had not had ed-tech training.

Generally the type of ed tech those surveyed reported using most for instructional purposes were iPads, Chromebooks, desktops or laptops, and electronic whiteboards.

But special education teachers said they were more likely to use the iPad and other assistive technologies for instructional purposes than general education teachers, who were more likely to use light tables or overhead projectors and screens and their own websites. Therapeutic professionals said the type of technology they most often used for instructional purposes were iPads, desktop or laptops and specific assistive technology devices.

“You see that strong, urgent desire to receive PD with mobile technology, but the fact is, they’re not getting trained or haven’t had that opportunity,” Ferdig said.

He noted particular concerns about the findings that a majority of pre-service teachers had not had access to ed-tech or app training.

“Our university programs are supposed to be on the cutting edge,” he said. “One would assume that in their teacher-prep programs they’d have the ability to use mobile apps and devices with all kinds of learners and that’s not the case.”

When it came to their use of apps in the classroom, educators overall said those used for instruction were aimed at communication, language and literacy as well as math and web browsing. Close to half of respondents said they learned about apps for use with students with special needs through friends or social networks; 35 percent said they found those apps through general websites.

The survey also found that special educators and therapeutic professionals were more likely than other educators to have used mobile devices with students with special needs, but even so, app use with these students was not the norm. A literature review of studies showed students with disabilities need more opportunities to learn through multiple modalities. The ability to use touch, swiping movements and various methods of interacting with technology were found to be particularly beneficial for these students.

The SpedApps initiative is also developing two apps of its own. The first is Number Line Touch: Multiplication, a puzzle-based math game, that is already availble, for use with elementary-grade students.

The second app, set to be released in a few weeks, is aimed at providing professional development for teachers around the use of mobile technology with special education students, Ferdig said. The app will focus on PD around specific subjects, starting with literacy, he said.

Instead of delivering content that was created for online PD and adapting it to mobile, “we actually built the content for a mobile app to begin with,” he said.

Ferdig said after reviewing apps and writing about what teachers want, it was important for researchers to create their own apps.

“We didn’t feel we could sit in our ivory tower and say, ‘we’ll tell you all you need to know about mobile app development,’ but we’ve never done it ourselves,” he said. “If we’re going to talk about special education and special ed apps, we need to build them too.”

One thought on “Educators Want More Mobile Technologies for Classroom Use, Better PD”