Education technology startup companies’ speed in moving through the initial stages of fundraising has slowed a bit in 2015, a likely indicator of investors becoming choosier in a crowded market.

So far this year, the median time between ed-tech companies’ seed and Series A funding rounds is 523 days, an increase from 498.5 the previous year and higher than the previous three years, according to an analysis from CB Insights.

The increased length of time isn’t necessarily a sign of bad news in the ed-tech sector, said Matthew Wong, a research analyst for CB Insights, a market research and analysis company.

It’s more likely a result of the sheer number of ed-tech companies jumping into the arena. (The total amount of funding available to them has grown: Ed-tech startups raised $2.3 billion over the past four quarters, a 96 percent increase over the last year, according to CB Insights.) 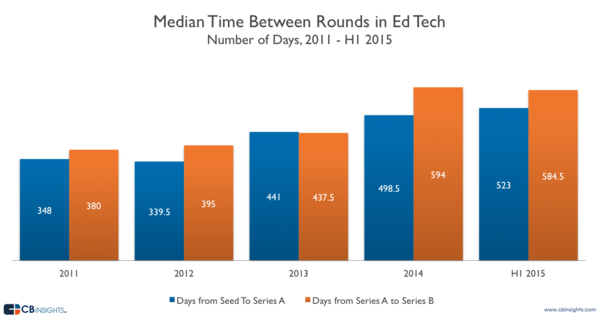 Between 2011 and 2015, the median time between seed and Series A rounds climbed from 348 to 523 days, which was not unexpected given the expanding market, Wong noted.

The median time between the next two stages of fundraising, Series A and Series B, dipped slightly from 594 (a recent peak) to 585 so far in 2015, CB Insights found.

And on the whole, compared to other segments of the technology sector—such as health-care, or consumer-oriented businesses—CB Insights’ data show that ed-tech companies’ median waiting time between seed and Series A funding isn’t especially long, Wong said.

A seed round is typically used by companies to build momentum to develop a product, which may be in its earliest stages, with relatively small amounts of money.

Series A fundraising is usually aimed at raising larger amounts, with investors seeking returns, and is often focused on giving companies the backing to try to bring their products to market.