The free apps, videos, and rental textbooks that comprise the Google Play for Education portal can now be accessed via Chromebooks, according to an announcement today from the Mountain View, Calif.-based technology company.

Originally designed for use on Android tablets and launched last November, Google Play’s expansion to the cloud-based Chromebook notebooks seems like a logical progression. 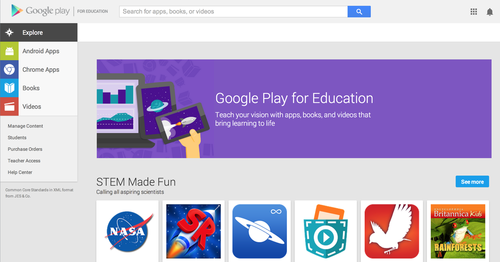 “It’s a very ‘Googely’ thing,” to release a new product that the company believes would have an impact, then modify or expand it to meet user demand, Rick Borovoy, product manager for Google Play for Education, said in a phone interview before the official announcement. Inquiries about using Google Play on Chromebooks began coming in almost immediately after it was released on Android tablets, he said.

With Google Play on Chromebooks, teachers will now be able to activate an entire classroom of notebooks in minutes, as they have been able to do in the Android environment. This new configuration of Google Play will allow students in schools with Chromebooks to also access apps and books using their own Android-based devices outside of the classroom as well.

Chromebooks have been gaining traction in the K-12 marketplace. Last October, Business Insider reported that 22 percent of all U.S. schools are using them. The continuing emergence of Chromebooks and Google Play represents a direct challenge to Apple’s dominance in the education tablet market with the company’s iPad. In its announcement about Google Play’s availability on Chromebooks, Google indicated that more than 10,000 schools globally are using the notebooks.  Asked to identify how many of those schools are based in the U.S., a spokesperson for Google—a company that is well-known for its data-tracking and analytics—declined to provide that data.

Google Play is built upon Google Apps for Education, a tool suite that includes email, calendar, and documents for collaboration. All Google Play users need a Google account, according to Borovoy. “Every student and every teacher has a Google email address,” he said. In April, Google announced that it stopped scanning Gmail accounts that are part of Google Apps, after questions arose in a lawsuit and an Education Week article about the practice and its implications for student privacy.

“We lay down a strict set of guidelines about what those apps can and can’t do to be put in the store,” said Borovoy. “Only apps that conform to these [privacy guidelines] get listed by Play for Education,” he said.

Google Play for Education has been configured so that teachers can “find, buy, and provision” apps using the same teacher-curated store that Android users do. “They can buy content, like books, using purchase orders … and can provision it using” groups, he said. While all the apps are free now, Borovoy said Google is “absolutely interested” in eventually offering apps that have a cost associated with them.

News about Google’s developments for education have been frequent in the past year. In January, Google announced that it would add the ability to rent books from its site, and in May, the company released news that it is beta testing a learning management system called “Classroom,” which should be released later this year.