School spending on instructional materials and construction has risen over the past year, as public funding for K-12 continues to creep upward from the darkness of the Great Recession, a new analysis finds.

The newly released 2015 Annual State of the Educational Marketplace report draws from different organizations and sources of data, and was published by the Education Market Association, a Silver Spring, Md.-based trade organization. The report can be purchased online, but the association gave Education Week permission to excerpt the data here.

One of the big takeaways from the report is that total K-12 spending for instructional materials rose by 9 percent over last year, to $11.8 billion in the 2013-14 school year.

That marks the first increase in instructional materials spending since the the 2007-08 year. Yet while the overall climate for buying has improved, a little perspective is in order—spending on those items has still not returned to levels before the Great Recession, which officially ended in mid-2009, the report points out.

The authors define instructional materials as textbooks, supplies, materials purchased for school libraries, educational media, and software—but not technological hardware. The data were compiled by MDR, a market research firm.

The rise in spending “not only reflects districts’ overall improved budget outlooks but also the willingness of districts to spend money for discretionary items, such as art and science supplies and digital resources,” the report says. “Level federal funding and the slow but steady increases in state funding have allowed schools  to begin to look beyond just holding the line.”

Another area of increased spending in K-12 isn’t tied to what’s going on inside classrooms—but rather to the school buildings themselves.

Nearly 55 percent of that spending, or $7.8 billion, went into new construction, and the remainder went to additions to existing buildings, retrofitting, and related work.

Spending varied by region. The area that included Texas, Louisiana, Oklahoma, and Arkansas is booming, and has the highest spending of any in the country, putting $2.2 billion toward school construction of one kind or another.

Only one region, the one that includes Illinois, Minnesota, and Wisconsin, spent less than $800 million on school construction, and even in that case, school districts in those states reported spending more in 2014 than the previous year.

The data on school construction are drawn from School Planning & Management’s 20th Annual School Construction Report, and it covers activity in 2014, as well as activity that has begun in 2015.

The report also breaks down spending on school supplies. The average family this year will spend $97.74 on those items. That’s down slightly from about $101 per year, according to the National Retail Federation. (See the year-by-year breakdown, below). 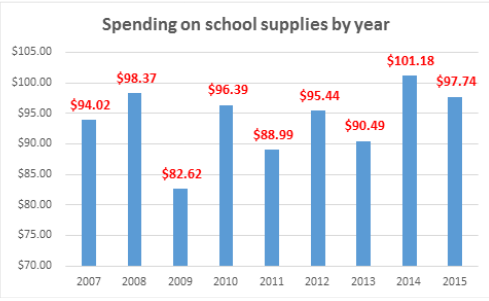 When parents cut back on back on school supplies this year, it’s probably safe to expect a rebound next year, as families that scrimped and saved try to replenish, the federation explains.

Overall, when apparel, supplies, and electronics are included, the average family will spend about $630, the federation says. And total spending on school supplies will be about $3.9 billion.

4 thoughts on “Spending on Instructional Materials, Construction Climbing in K-12”