The board of Agora Cyber Charter School, the second largest virtual school in Pennsylvania, has dealt several blows to K12 Inc., the publicly traded company that manages the school and provides key technologies and services to run it and educate its students.

The board voted unanimously in meetings over the past few weeks to transition Agora into a self-managed entity, hiring executives to lead the 10,800-student virtual school, and contracting with new vendors for its student information system, learning management system, and computers, beginning July 1, 2015.

Now, it appears Agora is working on developing its own curriculum for grades 6 to 8 over the next year, a step that might suggest the K12 Inc.curriculum Agora currently uses could also be in jeopardy of being dumped as well.

“It’s sort of the worst possible scenario for K12,” said Trace Urdan, a senior analyst for Wells Fargo Securities in San Francisco. K12 gets about 13 percent of its revenues from Agora, and about 10 percent from the Ohio Virtual Academy, according to the company.

Although no final decision about the curriculum has been announced, if K12 loses that final piece of the contract, it could impact the company’s earnings by as much as $44 million annually if no adjustments are made to K12’s overhead, Urdan estimated in an Equity Research report. “We’ve been counting on them to hang on to the curriculum piece, which is high margin for K12,” Urdan said in the interview.

On Friday, K12’s stock was trading near its 52-week low price of $17.15, although K12’s fourth-quarter earnings beat analysts’ predictions. 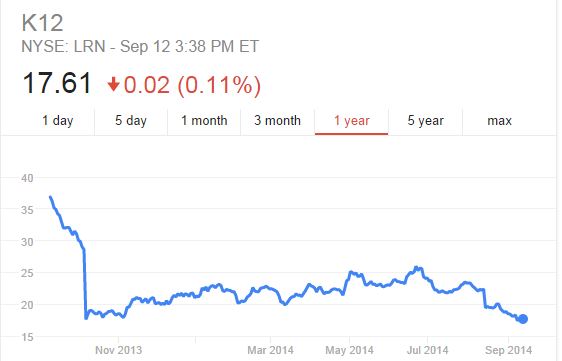 A K12 spokesman declined to comment on the developments at Agora, referring Education Week to its June statement, which indicated that the renewal application for Agora’s charter agreement with the Pennsylvania Department of Education would govern operations for the 2015-2016 school year and beyond. Agora is the second-largest charter school in the state, behind the Pennsylvania Cyber Charter School, which is not managed by K12.

Mary Steffey, who chairs the Agora board, said Friday she would not comment on the developments.

Partnering with school districts and nonprofit charter school boards, K12 provides school management services to 74 online-only and blended public schools in more than 30 states, according to the company.

“This is one of K12’s most profitable schools, so it’s going to hurt them,” said Gary Miron, a professor of education at Western Michigan University who conducts research on for-profit and nonprofit education management organizations. “It’s profitable not because of it’s performance, but because it’s a large school and because Pennsylvania pays very high per-pupil funding for virtual schools relative to other states.”

Earlier this year, Education Week covered the pushback against cyber-charter applications in Pennsylvania, where six applications to open new online schools were denied based in part on the issue of who would manage them.

Agora’s new, in-house management team has huge plans, said Urdan. “The ability to swap out every single piece of technology, re-organize the way the school is organized, swap out a large chunk of content in time for next year, and train all teachers in a new system—not to mention parents and students—seems enormously ambitious,” he said. “To get this all done without skipping a beat? We’ll see.”

Miron, for one, doesn’t think this spells long-term trouble for K12. “I’ve seen their stock prices go down after every scandalous report about their performance,” he said. The price rebounds because “what matters to investors isn’t the same as what matters to taxpayers or policymakers,” he said. “We’ll see their stock value go up.”