The Los Angeles Unified school district announced that it will stop buying Apple iPads that come loaded with Pearson digital courses, a decision district officials said was based on continuous problems with the technology-based curriculum.

Officials in the nation’s second-largest district also said they will seek to recoup the costs of licenses for the curriculum that the school system paid for, but has been unable to use. 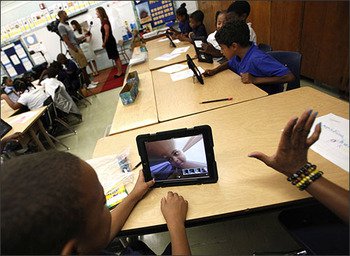 The district’s demands came in a succinct one-page letter sent on April 13 by the district’s general counsel to Apple. The letter calls for Apple and district teams to start meeting the week of April 20 to determine how the “disassociation” from Pearson, and the reimbursement can be carried out. Pearson was a subcontractor to Apple in the iPad deployment.

The letter indicated that “LAUSD is extremely dissatisfied with the work of Pearson [in this initiative.] While Apple and Pearson promised a state-of-the-art technological solution…they have yet to deliver it.”

The school district’s decision is the latest twist in a dramatic and costly saga that began in 2013, when it was announced with great fanfare that Los Angeles would be providing iPads to every one of its 650,000 students. The projected cost was $1.3 billion, and the initiative was plagued with problems from the beginning.

Apple chose Pearson as a subcontractor, but the curriculum loaded onto the iPads was not complete when it was rolled out in classrooms. Teachers reported that they were not adequately trained in how to incorporate the technology into the classroom.

As problems associated with the iPad purchase continued to mount, school Superintendent John Deasy announced last October that he would resign from his post. In December, the Federal Bureau of Investigation raided district headquarters, carrying off 20 boxes of documents connected to the procurement of the technology.

Thus far, the district has paid Apple almost $73.7 million for 120,400 iPads loaded with with Pearson courses.

A March 19 internal memo from Bernadette Lucas, the director of the district’s instructional technology initiative, said many teachers attempting to implement the Pearson System of Courses—the official name for the curriculum product—in the classroom had been repeatedly stymied in those efforts.

As a result, only two schools out of 69 are still trying “to use the Pearson application regularly,” Lucas wrote.

More than 35,000 L.A. students have access to the Apple devices loaded with the Pearson app, through which the memo says they were supposed to have “unimpeded access” to the English language arts and mathematics courses on the iPads.

However, the memo continues, fewer than 5 percent of the schools that were given the curriculum on iPads have consistent access to the content. District staff have spent “thousands of hours” troubleshooting what Lucas indicated were “Pearson-related technical issues in schools.”

Lucas described the problems with Pearson’s curriculum as falling into four categories:

Lucas also points out that none of the nine issues detailed in these categories has been resolved to the satisfaction of L.A. Unified.

In a statement released April 15, Pearson acknowledged that “there have been challenges with the initial adoption, but we stand by the quality of our performance.”

Beyond that, the company expressed pride in its “long history working with LAUSD and our significant investment in this groundbreaking initiative to transform instructional practices and raise expectations for all students.”

Apple has not yet responded to a request for comment about the district’s demands.

Photo: Students photograph themselves with an iPad after receiving them in class at Broadacres Elementary School in Carson, Calif., in August, 2013. (Photo credit: Bob Chamberlin/Los Angeles Times/AP)