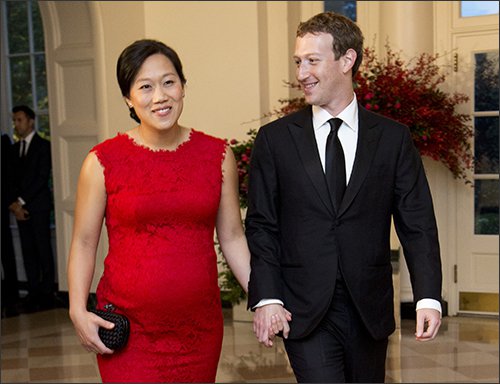 A portion of that money will go into backing the popular, if often vaguely defined, goal of promoting “personalized learning” opportunities for students.

Zuckerberg and Chan announced their intentions in a Facebook entry titled, “A letter to our daughter,” newborn Max, shown with the couple below.

One component of achieving those goals, they said, rests partly with the question of, “Can you learn and experience 100 times more than we do today?”

The couple described a vision for bringing personalized learning that would provide “more equal opportunity to anyone with an Internet connection,” creating the potential to  customize lessons to meet students’ academic strengths, weaknesses, and interests:

“Your generation will set goals for what you want to become—like an engineer, health worker, writer, or community leader. You’ll have technology that understands how you learn best and where you need to focus. You’ll advance quickly in subjects that interest you most, and get as much help as you need in your most challenging areas. You’ll explore topics that aren’t even offered in schools today. Your teachers will also have better tools and data to help you achieve your goals.

Even better, students around the world will be able to use personalized learning tools over the Internet, even if they don’t live near good schools. Of course it will take more than technology to give everyone a fair start in life, but personalized learning can be one scalable way to give all children a better education and more equal opportunity.

We’re starting to build this technology now, and the results are already promising. Not only do students perform better on tests, but they gain the skills and confidence to learn anything they want. And this journey is just beginning. The technology and teaching will rapidly improve every year you’re in school.

Your mother and I have both taught students and we’ve seen what it takes to make this work. It will take working with the strongest leaders in education to help schools around the world adopt personalized learning. It will take engaging with communities, which is why we’re starting in our San Francisco Bay Area community. It will take building new technology and trying new ideas. And it will take making mistakes and learning many lessons before achieving these goals.”

The Facebook executive and his wife said their donations to education, health, and other areas would be channeled through a philanthropic effort, the Chan Zuckerberg Initiative. Zuckerberg said he plans to continue to serve as Facebooks’ CEO for “many, many years to come,” and that the distribution of money from the couple’s Facebook shares would occur over the course of their lives.

[UPDATE: A day after making the announcement, Zuckerberg clarified that the Chan Zuckerberg Initiative would be structured as a limited liability company, rather than as a traditional foundation—giving it greater flexibility to make private investments and support policy issues—and not just charitable work.

An LLC typically has characteristics of both a corporation and a partnership. After the initial announcement about the couple’s plans, a wave of online commentators criticized Zuckerberg’s creation of an LLC, with some questioning whether it would benefit the couple financially.

But in a post on Facebook, Zuckerberg sought to make a case for using a  limited-liability company. He said establishing the initiative as an LLC would allow it to pursue its mission by funding not only nonprofits, but also by through investments in commercial enterprises and “participating in policy debates.”

To the extent the organization recoups profits, those will be used to advancing its mission, Zuckerberg said.

Zuckerberg also said that if he and his wife were transferring shares to a traditional foundation, they would stand to receive immediate tax benefits, but by going the LLC route, they will not. They will also pay capital-gains taxes when their shares are sold by the LLC, he said.

The Facebook official noted that the couple’s previous gifts have flowed to entities with a variety of missions, in the nonprofit world and private sector. They’ve supported a non-profit education organization, Startup:Education; as well as the Breakthrough Energy Coalition, which will make private investments in clean energy. They’re also backing government efforts such as the Center for Disease Control’s Ebola response and San Francisco General Hospital.

“What’s most important to us is the flexibility to give to the organizations that will do the best work—regardless of how they’re structured,” he said.]

Zuckerberg and Chan have shown a strong interest in recent years in putting their financial might, and Facebook’s engineering expertise, into efforts to improve schools, particularly through technology.

He made a much-publicized donation of $100 million to the Newark, N.J., public school system, a gift meant to support broad transformation in the long-troubled district. Critics have said that those plans were poorly executed and unrealistic, and fell short of their goals.

Earlier this year, Facebook announced it would have its engineering staff help the Summit Public Schools, based in California, refine a digital platform meant to improve students’ personalized-learning experiences. Summit officials have pledged to eventually make the digital tool available for free to any school in the United States.

And just last month, Zuckerberg and Chan announced that they would donate $20 million to EducationSuperHighway, a San Francisco-based nonprofit that seeks to improve K-12 Internet connectivity across the United States. (See my colleague Ben Herold’s recent, powerful reporting series on the lack of Web access in rural communities, reporting that was informed by EducationSuperHighway’s data.)

In their announcement, Zuckerberg and Chan showed a strong interest in correcting online inequities, pledging to help improve access to the Internet, possibly through virtual education. Reliable access to the Web, they said, can provide educational opportunities, even “if you don’t live near a good school.”

“Personalized learning” is generally defined as efforts by schools to tailor lessons, curriculum, and instruction to the academic needs of individual students—strategies often bolstered with sophisticated technology.

But the term is amorphous, particularly in the burgeoning K-12 commercial market, where companies peddling ed-tech tools and systems routinely promise to deliver personalized products, in the hope of picking up buyers in school districts.

Along with their focus on education, improving public health, especially among children, will be another major area that receives financial support, the couple said. The couple wrote of the links between child poverty, poor health, racial and other bias, and students not reaching their potential, and eventually ending up in prison.

“We need institutions that understand these issues are all connected,” Zuckerberg and Chan wrote, alluding to her interest in promoting schools that place an emphasis on nurturing healthy children. Only with schools, health centers, parent groups, and organizations working together, they said, “can we start to treat these inequities as connected.”

Photo, top: Zuckerberg and Chan arrive for a state dinner in the East Room of the White House earlier this year.–Manuel Balce Ceneta/AP-File