The ed-tech community for the first time primarily defines “online courses” as courses being delivered in a blended learning environment, rather than as long-distance education, according to a new study that will be released later this month.

The discovery came during research into why the “online course” category of companies’ ed-tech revenues jumped by an estimated 320 percent in one year—from under $200 million in 2011-12 to nearly $800 million in 2012-13, according to a study originally conducted last year by the Education Technology Industry Network of the Software & Information Industry Association, or SIIA. 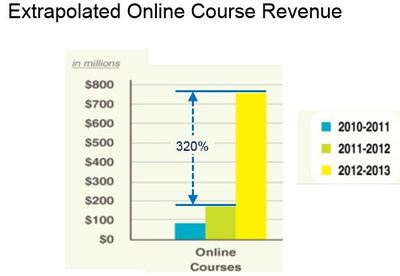 An increase of that size merited a closer look, so the organization commissioned a follow-up study by John Richards, president of Consulting Services for Education, a Newton, Mass.-based firm that conducted the original research.

Richards began interviewing leaders of companies that reported the revenues, and was surprised to discover that the “virtual education for at-home learners” definition has been replaced in the ed-tech lexicon, he said. Instead, it is considered a course delivered online that incorporates a classroom experience.

His findings will be released in the “Behind the Data: PreK-12 Online Courses Market,” which is expected to be available from the SIIA later this month.

Besides the definition changing, so is what’s offered in online courses. A primary focus on e-books and lectures captured on video in 2010-11 has evolved to include more instructional tools, including interactives, simulations, additional video, modules, games, and integrated assessments.

Richards said the 23 executives from the 20 companies he interviewed have reported revenue from a variety of categories, illustrating that they don’t all specialize in one area.

In the table below, “first touch” refers to the first time a student is taking that online course. He said 25 percent of companies reported doing only professional development online. “If you take them out of the equation, you see that three-fourths or more of the companies that do online courses do not specialize,” he said. 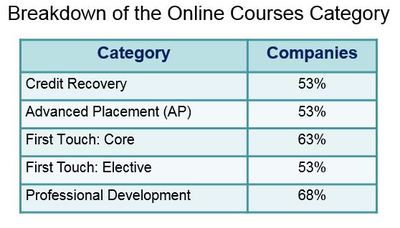 The fact that the K-12 infrastructure is now in place to deliver online courses in schools is one of the driving factors for the boom in those offerings, Richards said. Beyond that, the courses can now fill curricular gaps, giving students in rural areas the opportunity to take AP physics, for instance, if no one is teaching it in the traditional sense. And, he said there’s “growing market acceptance” for offering online courses in the classroom.

The print-to-digital transition is contributing to the changing landscape of language, as well, he said.

“It’s not just taking textbooks and translating them to digital,” Richards said. “Classrooms are networked. Teachers are really learning new choreography. And most students want to learn as they play, shop, and collaborate.”

Richards, who is an adjunct lecturer on education at the Harvard Graduate School of Education in addition to running his own consulting firm, said he was blindsided by the evolving meaning for online courses.

“This language shift has occurred when no one was looking,” he said. Researchers in the field are still thinking of online courses as virtual, asynchronous education, according to Richards. In the meantime, the K-12 marketplace and K-12 educators are adopting new definitions.

Who knows what definition shifts will occur in this year’s ed-tech marketplace study? Richards said he is collecting data for the SIIA’s ed-tech industry 2014 market survey, based on revenues from July 1, 2013 to June 30, 2014.

Graphics: Consulting Services for Education, Inc. on behalf of the Education Technology Information Network of the Software & Information Industry Association