The recent overhaul of the E-rate program won’t just bring a tide of new money and policy changes to schools—it also has the potential to encourage innovation across the ed-tech industry, a top federal official predicts.

Jessica Rosenworcel, a member of the Federal Communications Commission who backed the E-rate reboot, spoke last week to an audience of technology entrepreneurs in San Francisco about the overhaul of the federal telecommunications program, and urged content providers to use it as a springboard to improve what they deliver to schools.

Rosenworcel, speaking this month at the headquarters of Airbnb, the company that developed a service that allows homeowners to rent space to visitors, questioned whether education providers have kept pace with the digital advancements made by other industries. At one point, she referred to the textbook industry as “unimaginative,” and in need of change, according to Government Technology magazine.

In an interview with Education Week, Rosenworcel explained that she was referring to the FCC expanding the overall “capacity” of the E-rate program—among other changes, the program’s funding cap will jump from about $2.4 billion to $3.9 billion a year—and how she hopes the school industry will respond.

The commission this month, and in an earlier set of policies adopted last year, made several significant changes to the E-rate. The FCC refocused funding on broadband and schools’ and libraries’ internal connectivity; phased out support for older technologies; allowed program applicants to seek money to build their own broadband networks; and secured funding for unused or “dark fiber,” among other changes.

Rosenworcel elaborated in the EdWeek interview on how the ed-tech market might respond to a new E-rate, and about the broader impact of the refashioning of the nearly two-decade-old program. 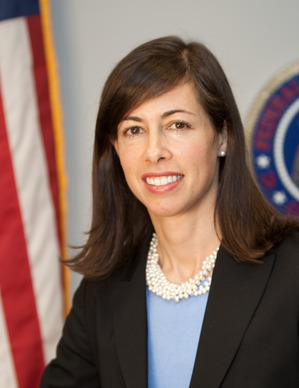 Much of the focus of the changes to the E-rate has been on the expansion of support for broadband and internal K-12 connectivity. What impact is that change likely to have on ed-tech providers?

What we did with respect to broadband is exciting on its own. But what’s truly going to be revolutionary is that by putting this big bandwidth in all of our schools nationwide, we created scale economies for the development of new education-specific devices, technologies, and content services. And from that new national scale, we’re going to see a range of innovations that change the way that students learn, and the ways that teachers teach.

Is that scale you’re referring to brought about simply through greater connectivity and faster speed?

And also by making the E-rate program focus on broadband, and making sure it’s available to all schools nationwide, with a budget that reflects the digital economy.

What sorts of improvements in content would you expect?

There are so many exciting things we can do with this bandwidth, with learning and teaching. Imagine you’re studying astronomy and you can migrate through the universe. Imagine that your textbooks are not limited to paper, but that they come alive as you study cellular structure. If we can create ways of learning that are more accountable, where you’re precluded from moving on to the next chapter before you answer some questions that reflect that you learned what you needed to. All of these things are possible now, and could make education more creative, more accountable, and frankly more relevant to the digital world we live in.

A common complaint of school officials is that they’re overwhelmed with ed-tech products, many of them of poor quality, and that they have little way to separate the good from the bad. Is it possible the changes to the E-rate will simply accelerate the delivery of substandard products?

I think the marketplace for educational content is going to grow more vibrant as a result of what we’ve done. It’s going to grow more creative and more diverse. The era of school districts choosing a new science textbook every seven to 10 years is something that we should bid goodbye to. It’s time to think about how we can update educational content more frequently, and come up with ways to use it to teach that takes advantage of the native possibilities for digitalization.

Even with the recent changes to the E-rate, you’ve spoken about students having access to the Internet but limited or no access at home. What’s the nature of the problem, and what do you believe the FCC should do to help?

Seven in 10 teachers today assign homework that requires online access. But according to FCC data, one in three households do not have broadband at home. Where those sets of figures overlap is what I call the “homework gap.” Imagine if you’re a student with an assignment that requires access at home, but no broadband at home. It’s hard for you to do your homework, it’s hard to research a paper, and it’s not easy to do things like apply for a scholarship on a mobile phone or a mobile device.

The agency needs to think not just about E-rate, and getting broadband to schools, but coming up with a variety of ways to make sure that students can do their homework at home. That requires online access. If we do this well and we do this right, we will be able to turn a generation of students from digital consumers to digital content-creators…that’s exciting for education, and exciting for the economy.

[Fixing the problem requires] things like more Wi-Fi, it includes more access in our libraries, which E-rate helps with. And it includes reforms of things like the FCC’s Lifeline program, which historically has helped low-income communities get connected to basic voice [telephone service].  We live in the broadband age, and it’s time to take a fresh look at that program, and think about how we can also use that same subsidy for basic broadband services…that could go a long way to helping low-income students get the access they need to do their schoolwork.

This Q-and-A has been edited for clarity. Photo courtesy of the FCC.